From my family to yours, we wish you the happiest of holidays, and the best wishes for a healthy, happy new year filled with love and good fortune.

Posted by Phillyradiogeek at 4:35 PM 2 comments: 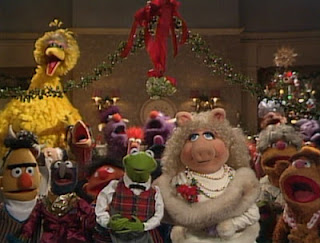 Posted by Phillyradiogeek at 9:31 PM 2 comments: 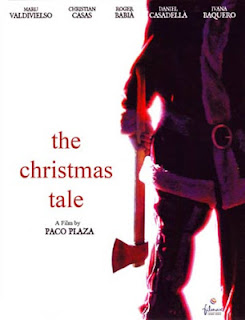 Just like my first Christmas-themed Tuesday's Forgotten feature this year, this is another one that is off the beaten path, in that it's a horror tale: the Spanish-language film Cuento de Navidad (A Christmas Tale).

The film is set in 1985 and centers on five 12-year-old Spanish youths. The kids, who live in a coastal summer resort town, stumble across a mysterious figure dressed as Santa Claus in a deep ditch in the woods. When they go to get help, they learn that the person is a woman wanted for stealing two million pesos from a nearby bank. Instead of alerting the authorities right away, they (foolishly) decide to keep her in the ditch until she reveals the location of the loot and a reward is posted for her capture. This leads the youths on a downward spiral a la Treasure of the Sierra Madre, as they fight internally over the woman's fate.

Oh yeah--two of the kids perform a voodoo zombie rite that they've seen from their favorite horror movie, the fictitious film within a film Zombie Invasion, scenes from which are interspersed throughout the main movie. If you want to see if their attempt to turn the criminal into a zombie is successful, you'll have to see the movie. 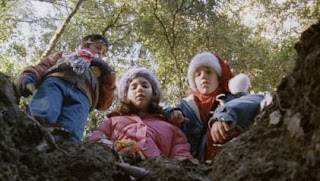 The film, directed by Paco Plaza of [REC] fame, does a good job of holding your interest to see how the various seeds that have been planted will grow. It's also interesting to see how American pop culture of the 80s influenced other countries: one of the children is obsessed with The Karate Kid, and they all adopt code names from The A-Team around their hostage to protect their identities. The scenes from Zombie Invasion are also amusing in their intentional cheesiness and grindhouse sensibilities.

The film was created for Spanish cable television as an entry in an anthology series, and was released in the States as part of a six-film horror DVD collection called 6 Films to Keep You Awake. If you have digital cable, you can see the film for free for a limited time on FearNet's on demand service, as I did.

Posted by Phillyradiogeek at 10:05 PM No comments: 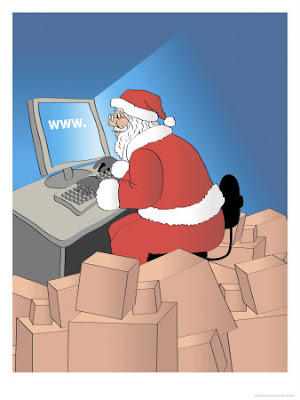 We're less than two weeks away from the big day, so it's officially crunch time. Get your presents, hang up your decorations, and when you're done, kick back with these cool Christmas links.

The most important link I can give you is the excellent Santa's Working Overtime. Consider your one-stop shop for online Christmas entertainment. Music, novelties, and yes, links. Highest possible recommendation!

To learn the latest in Christmas music, there are two great sites for you: Stubby's House of Christmas and Mistletunes. They both have a wealth of information.

Want some fun Christmas wallpapers based on comic book covers? Neato Coolville has you covered!

Again with the Christmas music: two great destinations for out-of-print Christmas music ripped from vinyl, you should--nay, you must!--go to Ernie (Not Bert) and Music You (Possibly) Won't Hear Anyplace Else. They're good folks.

Finally, for some great downloads of clip art , games, and recipes, among other great Yuletide items, check out XmasFun.com. I've visited this site every Christmas for years. Great stuff.

Have a great weekend! Finish your shopping! Don't drink and drive!
Posted by Phillyradiogeek at 11:17 AM No comments:

I just saw this the other day and laughed my ass off. It's footage from A Charlie Brown Christmas mashed with a song by the Washington, DC-area punk band Bad Brains. You can tell how much I'm not hip on my punk rock history as I've never heard of the band before, yet Bad Brains was a prominent punk band. I saw this courtesy of freeform noncommercial radio station WFMU in Northern New Jersey.

It's A Bad Brains Christmas, Charlie Brown from Tad Was Here on Vimeo.
Posted by Phillyradiogeek at 9:23 PM 2 comments:

Tuesday's Forgotten TV: A Pinky and the Brain Christmas 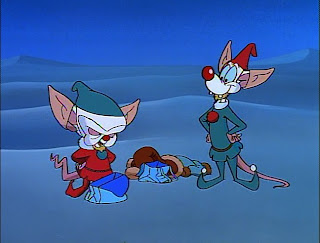 This week's Forgotten TV is the 1995 special A Pinky and the Brain Christmas. In traditional P & The B style, the duo plot to take over the world, this time on Christmas Eve via a doll invented by Brain. They trek to the North Pole to trick Santa and his elves to create enough of the mind-controlling dolls to enslave the world's children. All the while, Pinky works on his letter to Santa, much to Brain's annoyance. However, that letter turns out to be a key component in the special's resolution.

I admit that the special isn't exactly on par with the classics such as Charlie Brown and Rudolph, but the ending is so great--and unexpectedly touching--that it's well worth an annual viewing. I was in college when this first aired, and I remember my jaw dropping at how things played out.

Posted by Phillyradiogeek at 8:30 PM 3 comments:

Posted by Phillyradiogeek at 10:43 AM No comments: 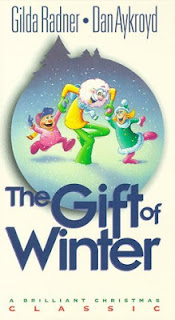 This week, it's the 1974 Canadian animated special The Gift of Winter. This special introduced the characters that would gain greater exposure in the 1978 Halloween special Witch's Night Out. Here, characters Small, Tender, Bazooey, Goodly, Nicely, Malicious, and Rotten march to see the spirit of Winter himself to protest the harsh temperatures that threaten to ruin the town's Christmas. It's a long, exhausting trek, and when they arrive at Winter's headquarters, they get a frosty reception.

As with Witch's Night Out, The Gift of Winter features the voice talents of Gilda Radnor as the narrator, Nicely, and Malicious; this time, she costars with her future Saturday Night Live castmate Dan Akroyd in the roles of Goodly and Rotten, one year shy of their not ready for primetime debut. Although the animation of Witch's was on the crude side, it's even moreso here, but not in a bad way. The characters look like sketchbook pencil drafts come to life, which gives the special an earthy appeal. With their heavy winter gear on, they look not unlike South Park characters!  It looks every bit the independently produced cartoon from 1974 that it is, and it's actually refreshing to see animation this raw in an age where so much animation is computer generated (as delightful as much of it is). 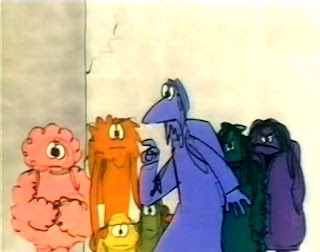 As in Witch's, the characters live up to their sobriquets: Nicely is nice and considerate, Goodly is righteous and an activist, Bazooey is a hippie, Small and Tender are...you know, and Malicious and Rotten? Let me put it this way: their idea of dealing with Old Man Winter? Sneaking in dynamite to blow up his headquarters. I kid you not! They literally plot to commit an act of terrorism! I love you, 1974!

This is one of the VHS tapes I picked up at the Goodwill store in my neighborhood earlier this year, and I'm glad I did so, as I highly enjoyed it.  Here below is the special in its entirety for you to enjoy. Please leave a comment after viewing if you can. Thanks!

Posted by Phillyradiogeek at 8:19 PM 4 comments: