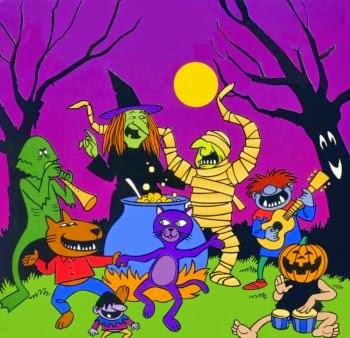 Since I've been doing the Countdown back in 2009, I've sharply increased my time spent listening to Halloween music. Of course, there's not much music out there specifically written about and for Halloween itself, but there certainly is if you expand the definition of the term to mean any music that is spooky, horror-themed, or monster-themed. Once you do that, you can have yourself a full-on Halloween hootenany! Here are some of a few of my favorites, not including the usual suspects such as "Monster Mash" and "Ghostbusters."

I loved this song the first time I heard it. The music is fun and makes you move, but still has a touch of thrill and urgency to it. The late Bert Convy, most famous for his hosting duties on various game shows such as Win, Lose, or Draw, takes this novelty song and adds real drama to it, selling the sizzle. What a fun record!

Before he became better known as Southern comedian Brother Dave Gardner, Gardner recorded a couple of obscure vocal records, one of which is this unusual song, describing a victim's experience at the hands of "the Devil's wife." It's a rhythmic, bass-driven song that grabs your attention right away and never lets go.

A slow, sultry rockabilly tune. Any strip club not using this song in their October performances is doing it wrong.

The Ran-Dells, "The Martian Hop"

This is a fun, all-ages novelty tune perfect for any grade schooler's Halloween party.

Finally, here is an awesome cover of Michael Jackson's "Thriller" by Spanish funk band Speak Low. It has a funky retro-70s feel to it that adds a whole new dimension to the familiar song. Put on your leisure suit and medallion before dancing to this one!

Well, tomorrow's the big day! Get ready!
Posted by Phillyradiogeek at 9:34 AM