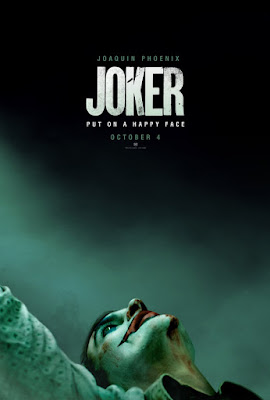 Posted by Phillyradiogeek at 6:00 AM

I think this looks ok so far, such buzz for Phoenix. Time will tell.

Exactly Bob. This will either be awesome or terrible; I have no idea which!

The COMEDY FILM NERDS guys note that Phoenix being a diminutive fellow works against him...most tv/film Jokers are at least tall and lanky, a lo most of the comics Jokers, when not also reasonably hefty, to help make the fistfights with Bats a bit more likely.

What would you say?

(If there's a series of recentish megahits that makes the Nolan BATMAN films look good to me, it's THE HANGOVER films...YMMV, as the kids don't write. Getting the DC films completely out of the hand of the likes of Nolan and Zac likely will only improve the product.)

The Joker is usually drawn rather thin, so I'm not surprised Phoenix went in that direction, but I'm not sure what his physique is normally, as I've never seen his films.

I haven't seen the Hangover films, but I did see OLD SCHOOL and ROAD TRIP by the same director, which I enjoyed. I can't get a good handle on how this film will turn out. It perplexes me for some reason.

OLD SCHOOL wasn't THE film of our gen, but it beat the hell out of THE HANGOVERs.