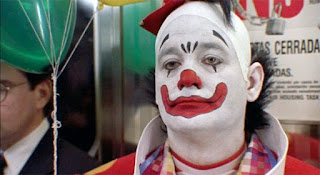 Happy New Year everyone! Much to my dismay, another holiday season has come and gone. However, that doesn't mean I can't share awesome stuff with you here, starting with the the first Tuesday's Forgotten Film of the year. This week, it's the 1990 Bill Murray vehicle Quick Change.

Murray plays the adequately named Grimm, an exasperated NYC public employee who has had it with the city's craziness on all levels. Talking his girlfriend and slow-witted friend into a bank robbery scheme, Murray decides to use the money to fund a trip away from the maddening crowd never to see the city again. The robbery itself goes off without a hitch. However, getting out of the city once the crime has been committed proves beyond challenging, as the would-be thieves find themselves mired in the same gridlock, civic ineptitude, and general wackiness of the city that inspired their heist to begin with. Jason Robards plays the police detective assigned to the case, who although on the right side of the law, can sympathize with Murray's plight.

The film, a remake of the French-Canadian film Hold-Up, can be predictable at times, but anyone who has been a lifelong resident of any city, let alone New York, will understand the characters' motivations and see themselves in the ridiculous situations the characters find themselves in. Just don't attempt to rob a bank to pay your way out of the city.

Here is the film's trailer.

Thanks!
Posted by Phillyradiogeek at 10:56 PM

Very amusing film, and the best of the three in what I think of as the Bill Murray Hates NYC trilogy, along with SCROOGED and GHOSTBUSTERS II.

Really loved this movie. I think now and again to check if Netflix has it, then I forget.

But thanks to you and this blog, it's now at the top of my queue.

Great choice - I haven't seen it in ages but now I really want to try and get my hands on a copy as I love crime capers in the Westlake mould - thanks for the reminder!

Hi, I just remembered this movie and added it to my netflix queue.

Thanks for the comments everyone! I'm glad this article went over so well :)

Hmmm...I remember renting Quick Change when it first came out on video, and not getting through it all. Based on the love I'm seeing here, maybe I need to revisit it...