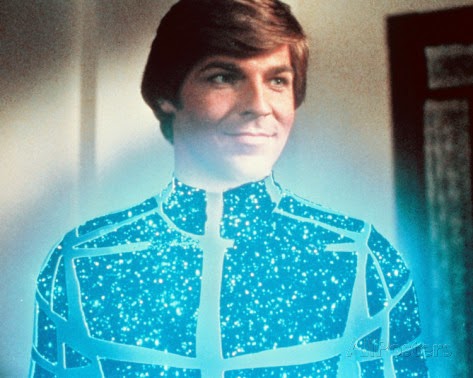 This week's Tuesday's Overlooked TV doubles as a tribute to the late Glen A. Larson, who passed away Friday, November 14th at the age of 77. Larson created some of the most popular action/adventure series of the 70s and 80s, including the original Battlestar Galactica, Knight Rider, The Fall Guy, BJ and the Bear, Quincy, M.E., and McCloud, among others. One of those "others" is this week's installment.

Automan starred Desi Arnaz Jr., as a computer programmer who creates a super-sophisticated hologram for use in solving elaborate crimes. The hologram was played by Chuck Wagner, who wore a special suit which special effects teams highlighted with starry imagery to give the illusion of a computer generated figure (except for Wagner's head). Automan was accompanied by a 3D cursor that could created any number of weapons, vehicles, or other tools that were needed. Adventure ensued.

The premise is certainly incredulous, but for the early 80s, the effects were unusual and exceptional, especially for TV. However, the expensive costs of the series combined with lukewarm ratings (not terrible, but not spectacular either) led to the series' premature demise, being canceled after 13 episodes.

It was corny, it was wacky, it was kitschy--so of course, I enjoyed it. I was also 8 at the time.

Here is the series' opening sequence, followed by an hour-long featurette starring Arnaz, Wagner, and other cast members reminiscing joyfully about their experiences making the show. This was featured on a DVD release of the series in the UK, the only nation in which the series is commercially available on DVD.

Posted by Phillyradiogeek at 9:15 AM