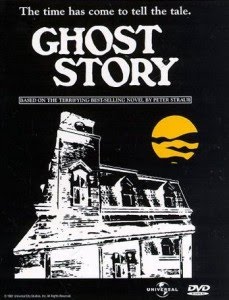 Sorry for not posting something yesterday, but Circumstances Beyond My Control got the better of me.  I'm back today with another Tuesday's Forgotten Film, and like last week's entry, this week also involves a "revenge from beyond the grave" tale.

Ghost Story is a theatrical film released in 1981 and stars screen legends Fred Astaire, Melvyn Douglas, Douglas Fairbanks Jr., and John Houseman (it was the last film for the former three gentlemen). The film, based on a novel by Peter Straub, tells the story of a group of old well-to-do men who are responsible for the death of a beautiful woman in their younger years.  They avoid telling the authorities and live their lives as if nothing happened.  Suddenly, in their old age, terrible things begin happening to them, as well as one of the men's sons, whose brother contacts the group to get to the bottom of things.  As I've already stated, this is a "revenge from beyond" story, you can surmise who's responsible for the horror. 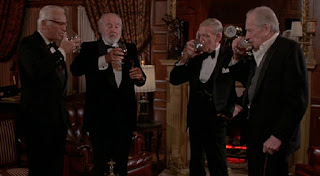 Like Dark Night of the Scarecrow, this was a favorite of my parents who watched it frequently over the years.  It's available on DVD from Amazon as well as on demand streaming.  Below is the film's trailer.

Posted by Phillyradiogeek at 1:26 PM

Joe and I tried to watch this a couple of months ago, but didn't stick with it long enough. Have to give it another try. What a cast!

I've seen bits and pieces of it when my parents would watch it, but haven't seen the whole thing. I'd like to hear what you guys think if you give it another try.

Still haven't taken the opportunity (in the copious free time)...but check this, about the apparently better than it has any business being PUNISHER: WAR ZONE:

Todd: haven't heard this yet, but I was surprised that yet another Punisher movie with yet another rebooted storyline was created.