Hi, remember me? Sorry it's been so long since I last posted. I planned on taking a few days off, but not quite this long. Let's get to it!

I'm sending off 2008 with the TV special Happy New Year, Charlie Brown. The Peanuts gang is assigned to read War and Peace during Christmas vacation, and Charlie Brown is having quite a hard time. I can't blame him; what kind of teacher assigns a bunch of 2nd graders War and Peace?

Enjoy, and Happy New Year! My blessings for you in the new year ahead.

Jesus of Nazareth: The Birth of Christ

Well here we are, Christmas Eve. The wait is almost over. In less than 24 hours as I write this, Santa Claus will have finished his yearly journey around the world and all the presents will be unwrapped. The season really does seem to fly by more quickly every year. If you're like me, you keep the Christmas celebration going through the whole week up to New Year's Day. I highly recommend you do the same. Of course, you should keep the Christmas spirit throughout the year.

Today I bring you the "reason for the season." Here is the telling of Christ's birth from the epic TV miniseries Jesus of Nazareth.

Here is the condensed version:

And so wraps another season of Christmas blogging. I don't think I had as high a number of posts this year compared to last year, but the quality was closely on par, if I do say so myself. I wish I had some Hanukkah programming this year, and I apologize for the lack of it (I have a nice Hanukkah post from last year still available); I'll do better next year.

I'll be taking a few days off from blogging to enjoy the holiday with my large family, and I hope you do the same. I will have a couple of posts next week to ring out 2008 and ring in 2009, so I will see you then. Until then,

Two days left! I won't waste time--on to some Christmas music videos, mostly from the 80s (of course).

Band Aid, "Do They Know It's Christmas."

The Kinks, "Father Christmas." Quality isn't great, but it's an awesome song, especially for you Grinches out there.

Here is the ultimate Christmas party song, and one of my absolute secular favorites, "Christmas is the Time to Say I Love You" by Billy Squier.

One more post before Christmas, then a couple of days off. See you then!
at December 23, 2008 No comments:

Yes, Christmas. The time for sleigh bells, carolling, mistletoe, and...spine-tingling, blanching terror? Absolutely! At least if you see these Christmas-themed horror movies. Occasionally, some filmmakers have decided to use the most festive time of year as a setting for thrills and chills. Here are just a few examples.

1974 saw the release of Black Christmas. Starring Olivia Hussey and Margot Kidder, the film centers around a group of sorority sisters stuck at college for the holiday being stalked by a psychotic killer. Here is a trailer for the film's release on DVD.

A remake was released on Christmas day in 2006 with no fanfare or box office to speak of. Another note: the director of this film would go on to direct another Christmas-themed film--A Christmas Story. Yes, THAT A Christmas Story.

Another film released in the 1990s centers around a psychotic killer (is there any other kind?) being taken to prison until a freak chemical accident turns him into a killer snowman--Jack Frost. Killer. Snowman. Read it again. At least this film doesn't take itself seriously--at all. Here's the trailer, and please, don't get it confused with the family-friendly Michael Keaton film. The young woman getting in the bathtub is none other than Shannon Elizabeth of American Pie fame.

The biggest blockbuster of the films listed here is Gremlins. I don't really need to explain this one, do I?

Several other Christmas horror movies involve a killer Santa. The earliest example is probably You Better Watch Out, aka Christmas Evil, aka Terror in Toyland. This 1980 film involves a man, obsessed with Christmas, who decides to take on the mantle of Santa Claus and reward the good---and punish the bad. I've actually seen much of this film, but not all of it, and it's notable that the film is not so much a slasher film but rather a psychological thriller. At the same time, the film also has a humorous air about itself, without getting too silly or spoofish. This scene is a good example. The movie is available this month on the on demand cable service Fearnet. Also of note: the actor who plays the psycho Santa is, according to Internet sources, the father of musician/singer Fiona Apple.

One film that does take its humor over the top is Santa's Slay, which reveals that Santa is, in fact, the son of Satan, who loses a bet and must bring cheer to the world. He then decides to Hell with that--literally. Santa here is portrayed by former pro wrestler Goldberg.

But the most notorious Christmas horror film of all is undoubtedly Silent Night, Deadly Night. A young boy, traumatized by the murder of his parents by a man dressed as Santa, grows up to be a killer Santa himself. Here is the trailer that was banned from telelvision.

Here, film critics Gene Siskel and Roger Ebert discuss the film on their 1980s series At The Movies. To put it mildly, they don't like the movie. The sound is extremely low on this clip, so you'll need to crank the volume to 11 to hear it.

That's just a small sampling of Christmas chillers; an Internet search will find you more. I'll get back to more cheery stuff in my next post, promise!
at December 21, 2008 No comments:

This is another post that goes out to the comic book fans that visit here. In this episode of the Cartoon Network series Justice League, several of the league members feeling the Christmas blues receive some Christmas spirit from their teammates. As much of a superhero fan as I am, I regret that I haven't seen much of this series at all, so this is a nice treat for me as well. Enjoy!

A Wish for Wings That Work

Today I offer A Wish for Wings That Work, a TV special featuring characters from the various comic strips of Berk Breathed, creator of Bloom County, Outland, and Opus. In this special, Opus the penguin wishes for, well, wings that work. Equal parts wit and charm highlight this animated program, with a bit more sophistication than normal Christmas cartoon fare. With Breathed closing the book for good on his characters earlier this year, it makes enjoyment of this special all the more worthwhile. 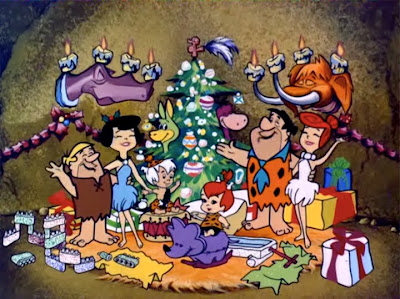 Here is another program that I looked for last year with no luck but am happy to present to you now. This Christmas episode of The Flintstones is one of the best Christmas episodes of a TV show I've ever seen.

When the real Santa Claus is sick, it's up to Fred, who's been moonlighting as a department store Santa, to fill in. The usually grumpy Fred is shown the light when he takes on the role of Santa, leading to a very charming and surprisingly heartwarming program. An hour-long special with a similar premise was created in the late 80s/early 90s, but this episode from the original series is much better. And Fred sings, no less.

Email ThisBlogThis!Share to TwitterShare to FacebookShare to Pinterest
Labels: Best of Me and You, cartoons, Christmas, TV 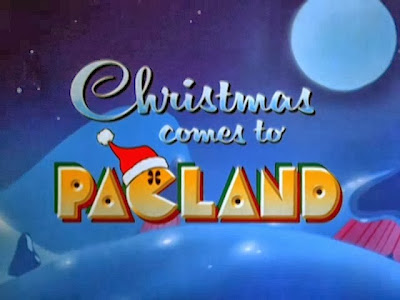 Keeping the record of continuous months with at least one Pac-Man post intact (4, if you're counting), here everyone in Pacland learns the true meaning of the holiday. Well, the secular meaning, at least.

Next, the chipmunk pair make their presence known in "Pluto's Christmas."

This is a classic and delightful early Disney cartoon, an adaptation of "The Night Before Christmas."

Here we get a sneak peak of Santa in his workshop:

I hope no one minds too much that my Christmas programming this year is so animation-heavy. See you this weekend. The big day is only two weeks away!
at December 11, 2008 6 comments:

The Bear Who Slept Through Christmas 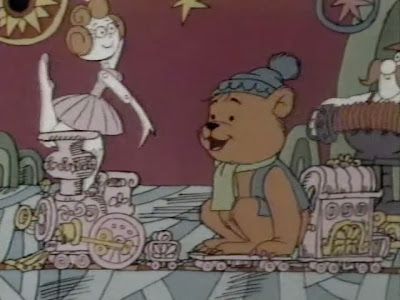 Today I'm offering a great find, something I've been looking for the last couple of years with no luck until now. The Bear Who Slept Through Christmas is a charming animated story about a small bear (voiced by legendary comedian Tommy Smothers) who decides to forego hibernating for the winter so he can experience Christmas for the first time. I haven't seen this special since I was very young and I'm delighted to share it with you now. Enjoy!

Hopefully you've seen the Vietnam War film Full Metal Jacket, or the comedy of this clip will be lost on you. The scene from the classic TV special Rudolph the Red-Nosed Reindeer which introduces us to Hermie the elf is redubbed with audio from Jacket with hilarious results. And I love the jingle bell censorship!

The title says it all. I love these commercials and look forward to them every year. I believe I have every one that was made below. Enjoy!


And this one is my absolute favorite of all!