So I Finally Read Watchmen

As readers of this blog likely know, I am a staunch comic book fan. I loves me some Spidey, Superman, Batman, Hulk, and others. But I’m not the most well read comic book fan out there. There are many historic and highly praised comic works that I’ve never read, but there is one comic book classic that I’ve finally experienced after many years—Watchmen, by writer Alan Moore and artist Dave Gibbons.

For those readers unfamiliar with this work, Watchmen is a 12-part comic book series published from fall 1986 through summer 1987 by DC Comics, publishers of Superman, Batman, and the majority of legendary characters from the earlier part of the 20th century. The story was not set in that same universe, however, but a universe parallel to ours. The “heroes” of the story differ from the usual comic book heroes in that they are highly flawed people who did not necessarily become heroes with the best of intentions, and most of them, with one glaring exception, do not possess superpowers, but simply are skilled vigilantes in costume. The plot starts out as a simple murder mystery, and then becomes something much more massive and dangerous in scope as the plot progresses, resulting in a twist ending. 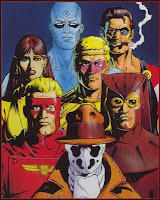 The features that make Watchmen stand out in comics fans eyes are the themes that permeate the story from beginning to end. Watchmen tells a much darker, mature, and adult story than was thought capable of comic book storytelling at the time, although such themes are commonplace in comics today. These themes include the exploration of the nature of a person who would choose to be a “superhero,” and what good such heroes are capable of achieving as world situations become increasingly desperate and apocalyptic.

Another characteristic of Watchmen is the layers of symbolism throughout the story. Dialogue from a character in one situation may mirror the action in another situation of the story, sometimes ironically so. There is also the use of a comic book story within the comic book that deals with the same themes as the “real” action. It is obvious that author Moore, who also wrote the comic stories V For Vendetta, League of Extraordinary Gentlemen, and my favorite comic story, Batman: The Killing Joke, planned the story very carefully, along with artist Gibbons, to whom Moore has frequently credited with several story characteristics. Words and art are very intricately meshed and compliment each other in ways I have rarely encountered in other stories. The only strong criticism I can give it is that it did not connect with me on an emotional level, although I certainly did connect with it on a cerebral, intellectual level. Then again, the story is intentionally unsentimental, so that may be more due to my own personal idiosyncrasies rather than a flaw of the story. 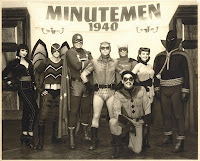 Ultimately, I’m thankful that I’ve finally read Watchmen, and I believe it deserves its place as a comic book classic. If you have always thought of comics as “kids’ stuff,” I highly recommend giving Watchmen a try. It’s a great way to introduce people unfamiliar with comics into the medium. Keep in mind, however, that this is not a children's comic book and is not intended for anyone sensitive to adult themes.

As you can see from my post of Wednesday January 28th, there is a highly anticipated film adaptation of the story debuting in theaters on March 6th. Click on that widget for the film's trailer.

Here is a piece of viral marketing for the film featuring a "news program" discussing the existence of one of the story's most remarkable characters:

Finally, here is a humorous depiction of the story's main characters if portrayed by the cast from my beloved Peanuts comic strip (artist unknown). 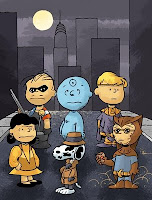 Thanks! Anyone familiar with the story please leave a comment (but no spoilers, please).

Better late than never, here is part 2 of the Crimson Ghost!

Back in the 1970s, NBC carried NHL hockey games nationwide. As the sport would be new to many viewers, the network commissioned the Hanna-Barbera animation studios to create a series of short cartoons explaining the rules and fundamentals of the game. The host of these cartoons was Peter Puck, a hockey puck complete with arms and legs (and skates!), who would happily brief newcomers to the world of professional hockey. These cartoons also aired on Hockey Night in Canada, which is the Canadian equivalent to the US's Monday Night Football.

In honor of this weekend's NHL All-Star Game, I present to you the first four episodes of the adventures of Peter Puck. Enjoy! Go Flyers!

On the eve of the season 5 premeire of Lost, here is an amateur film titled "Previously on Lost," about one man's attempt to catch up with the previous four seasons in one weekend. Funny stuff!

Welcome to the latest subject of the returning Saturday Matinee. Yeah, I know it's Friday, but it's easier for me to get this posted now so that it's in place for the entire weekend.

The latest feature is The Crimson Ghost. I saw this back in the late 1980s on a local UHF station (colorized, no less) and found it quite intriguing. Others may find it intriguing for two reasons. One, the face of the Crimson Ghost was used as the logo for the punk rock band the Misfits, and two, the Ghost's right hand man is played by Clayton Moore, who went on to greater fame portraying the Lone Ranger in various films.

It's not often you see an action film where the villian is the star.

Game over by PES

I saw this over on the Secret Fun Blog, the author of which received a good word from the artist who created this film. The title is "Game Over" and was created by an artist who goes by the name PES. The film recreates classic video games such as Centipede, Space Invaders, Asteroids, and yes, even Pac-Man, using common household items. This really caught my attention, and I'll be checking out more of his work, which you can see in the video links that appear after the film is completed. Enjoy!

I am happy to announce the return to this blog of the Saturday Matinee! This week I only have another montage of intermission films, but next week I plan on starting another great serial. Enjoy!

Submitted for your approval, from the 1990s ABC series Muppets Tonight, I bring you---"Seinfeld Babies!"

The holidays are offically over, and January has no particular theme to spend a whole month on, so for the next few weeks the blog will be completely freeform. I'll be posting whatever I feel is worth posting--you know, like a normal blog.

Here is a montage of show openings from an early to mid 1980s cartoon called Saturday Supercade. Airing on Saturday mornings on CBS, the show was an hourlong program featuring cartoons based on popular video games at the time. Frogger, Pitfall, Donkey Kong, Donkey Kong Jr, and Qbert were the video games of choice for this show. Like the Pac-Man cartoon I've featured several times, this was yet another way for the networks to cash in on the blooming video game craze.

This show is by no means a classic, and certainly isn't good, but it is a minor footnote to Generation X pop culture. See for yourself!