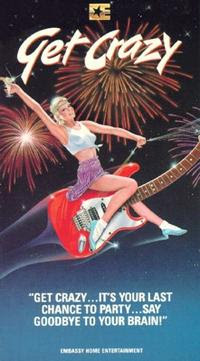 Hi everyone! I hope you had a fantastic Christmas/Chanukah/Winter Solstice/Kwanzaa/Festivus/etc. I'm home on Christmas vacation, which is why I totally forgot about this week's Tuesday's Forgotten--oops! Better late than never, right? With the last of the holidays left this season, New Year's Day, I have an appropriate choice for this week--the 1983 rock comedy Get Crazy.

Get Crazy stars Allen Garfield (Mother, Jugs, and Speed) as a Bill Graham-type rock promoter who owns a live theater in New York much like the Fillmore. He is preparing his annual New Year's Eve concert to welcome in 1983, but a greedy land developer (is their any other kind?) tries to sabotage the concert, with help from the promoter's betraying nephew, so he can take control of the building and demolish it.

The film includes outlandish antics from many over-the-top characters, both on and off the concert stage, and the film lives up to its call for wild behavior. I've only seen the film once on broadcast TV circa 1990 (and even then only in parts), and although it was once available on videocassette, it has never been released on DVD. That's a shame, because I'd love to spend this New Year's Eve welcoming 2012 with this wacky film.

Here is a fan-created trailer for the movie.

If I don't get to talk again before Sunday, Happy New Year!

UPDATE AS OF 12/28/2011: Oh happy happenstance! I just discovered today, completely by coincidence, that the movie is available on Comcast digital cable's movies on demand service in the free movies section. I get to see the movie this New Year's after all. Rejoice!
at December 28, 2011 No comments:

In keeping with blog tradition, I can't let Christmas Eve go by without saying this: Merry Christmas!

Batman and Robin make their second appearance in my Christmas presentation this year, this time in animated form, taking on Mr. Freeze (who else in a Christmas story?) in "The Cool Cruel Christmas Caper." Enjoy!

The Animaniacs Wish You a Merry Christmas

Bringing you good, classy holiday cheer, here are the Animaniacs wishing you a Merry Christmas as only they can. Enjoy!

Five days left! Gotta keep things moving, and I do so with this week's Tuesday's Forgotten, a TV special that aired as an episode of The Ed Sullivan Show.

"The Great Santa Claus Switch" aired on December 20, 1970 (exactly 41 years ago today!) in Sullvan's time slot, but Sullivan gave the entire hour over to the Muppets, who had been a hit on Sullivan's show and were becoming even more high profile as Sesame Street had been a big hit for the past year. In the special, Santa is kidnapped by an evil wizard named Cosmo Scam, who plans to masquerade as Santa to steal from people's homes. Both Santa and Cosmo were played by Art Carney. The special is also notable as it features an early incarnation of Gonzo (names Snarl in this special) and Thog, a giant blue Muppet who appears in the opening credits of each episode of The Muppet Show (and has a cameo in the new Muppet movie).

Less than one week left to Christmas, and I've barely posted any of the stuff I wanted to. Darn you, real life!

I'll try to post what I can throughout the week, even if it means posting more than once a day. Here is the 1992 NBC special Noel, an animated special written by Rankin/Bass alumnus Romeo Muller and narrated by Charlton Heston. Noel is a glass Christmas ornament if who has a "happiness." For more on this happiness and what it's capable of, watch below. Thanks!

I am VERY sorry for my severe lack of posting during this holiday season! It's very unlike me to have such a low  rollout of posts this time of year, but my life is extremely busy both at work and home, even more so than usual. Please bear with me and I'll do my best to turn things around the remainder of the season.

This week I offer a TV-movie version of a classic 1947 Christmas film, Miracle on 34th Street. In this 1955 version, Thomas Mitchell plays Kris Kringle in New York City on trial for being crazy, but a kind-hearted lawyer (imagine that) defends the man as well as warms the hearts of a no-nonsense woman and her starry-eyes daughter. This version aired as an installment of The 20th Century Fox Hour on CBS. There were two additional TV-movie remakes of the original film, a 1959 live version on NBC and a 1973 TV-movie starring Sebastian Cabot as Kris (this is the version I first saw).

Here, free and legal, is the 1955 TV-movie version of Miracle on 34th Street in its entirety. Enjoy!

Back in the 1980s, TV networks had an odd habit of recreating their current popular sitcoms with Saturday morning animated counterparts. NBC was no exception, and for one season aired a cartoon show based on Punky Brewster.

They couldn't leave the sitcom formula alone. To "kiddify" an already kiddified show, they added a magical character named Gloamer, who sounds so much like Jar Jar Binks NBC should sue George Lucas for copyright infringement.

In remembrance of Pearl Harbor Day and all US military. 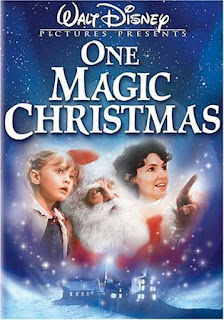 Welcome once again to Tuesday's Forgotten, where we blow the dust off of a neglected film/TV series/etc. and give it the once over. Today I offer the 1985 Disney film One Magic Christmas.

Mary Steenburgen plays Ginny, a wife and mother who is quickly losing her Christmas spirit in the wake of her husband's unemployment and dwindling finances. Entering into the family fray is Gideon, a guardian angel, played by Harry Dean Stanton, assigned by Santa Claus to help Ginny rekindle her Christmas spirit. Gideon does this not directly, but through Ginny's children, particularly daughter Abbie.

What sounds like a typical Christmas redemption story is colored by some interesting plot choices. Although the film has a happy ending, much of the film is surprisingly dower and glum, especially for a Disney film, and the story takes the viewer to some pretty deep lows before getting to the high of an ending. It may be the most sober Christmas movie you'll see.

Find out for yourself while watching the entire film. Enjoy! 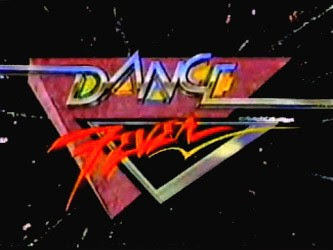 Ah, Dance Fever. What can I say about this classic, revered hallmark of American television entertainment? Well, it had amateur dancers competing on national television for prizes and cash. Plus, it debuted during the height of the disco craze and continued well into the neon glitz of the 80s. It was as cheesy as you can possibly imagine, and watching now, far removed from its pop culture context, it's delightful fun! And like all fine TV shows, it even had a Christmas special!

Here it is from the Christmas season of 1980, hosted by Danny Terrio, with celebrity judges Robert Blake, Chad Everett, and Connie Stevens, plus special performances from David Copperfield and the Gap Band, no less!. Put on your disco dancing shoes and boogie!