See You In September!

Hey kids! Due to being swamped with work, family responsibilities, and a days-long mini-vacation coming up this weekend into next week, I've decided to take the next two weeks off from blogging.

But don't worry, sugar bear. I'll be back the day after Labor Day with a regular schedule, and what I hope will be a soft relaunch of the blog. It's gotten a bit stale here--time to shake things up a bit.

Feel free to check out the archives to tide you over until then. There's almost five years worth of cool stuff to peruse. In fact, if an article has missing videos or broken links, please leave a comment so I can fix them. You'll be doing me and your fellow readers a favor.

Also, I'll still be active on Facebook and Twitter, so feel free to check me out there. You can connect to me via those places by clicking the widgets along the right side of the blog.

Have a great rest of the summer, have a safe and wonderful Labor Day weekend, and I'll see you here Tuesday, September 4th. Thanks!
Posted by Phillyradiogeek at 1:41 PM 2 comments: 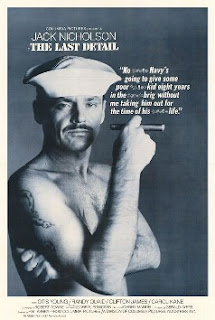 This week's Tuesday's Forgotten Film is the 1974 Jack Nicholson vehicle The Last Detail.

Nicholson plays Billy "Bad Ass" Buddusky, a sailor who, along with fellow sailor "Mule" Mulhall (Otis Young), is ordered to escort a young recruit named Meadows (Randy Quaid) from Norfolk, Virginia to a Naval prision in Portsmouth, New Hampshire for stealing forty dollars from an officer's wife's charity fund. Knowing that he will be treated poorly at the prison by the sadistic Marines there, Bad Ass and Mule decide to show Meadows the time of his life on the way to the prison by way of drink, sex, and even ice skating at Rockafeller Center.

Nicholson is doing his usual Nicholson impression here, but at least it perfectly fits the character, and although there are certainly plenty of laughs to be had, there is a strong undercurrent of sadness throughout the film that moves to the forefront by the end. It's a highly engaging film that deserves another look, even if you're sour on Nicholson.

Here is the film's trailer. The editors must have had a hard time creating this, as the film itself is peppered with profanity from beginning to end. Thanks!

Posted by Phillyradiogeek at 9:04 AM No comments:

VHS Treasures at the Goodwill

Yesterday I had the chance to do something I rarely get to do--peruse the aisles of the local Goodwill thrift store. It's true that 99% of the things you'll find there are junk, donated by others mostly to get the tax write-off and to dispose of stuff they no longer have use for but don't have the heart to throw away, lest it be destroyed forever. It's the inanimate objects equivalent of "doggie heaven"--the stuff isn't dead, it's just gone away to roam the pasture freely.

I only had a few minutes to spare while I was there, so I didn't take stock of the entire store. I focused on the one area I thought would bare the most fruit--the VHS tape aisle. You see, despite this being the 21st century, with its lightning-speed Internet, streaming media, high-definition picture, and on-demand services, I still have no less than four--count 'em, four--VCRs in my home, two of which are parts of TV/VCR combos (remember them?). While I also have four DVD players and am addicted to YouTube, I still have a decent library of VHS tapes that I don't plan on parting with. In fact, as will be evidenced by this article, I have no trouble replenishing my stack of tape--as long as the price is right.

And indeed, the price was right in this instance. The store is having a sale--I still find that funny, a thrift store having a sale--on video tapes this week: two tapes for 99 cents. 99 cents! How can any video Luddite turn that down? I left the store with six videos in all, and here they are!

The first thing I noticed (besides the fact that they had a healthy dose of betamax tapes available, but that's another story), was The Magic Christian, starring Peter Sellers and Ringo Starr. I've known of the film for nearly as long as I've known of the Beatles, which is a really long time, but I've never actually seen it. Now, for only half a buck, I can watch it whenever I want. 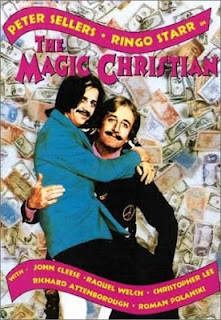 The next tape I picked up is another Sellers classic, Murder By Death, also starring Eileen Brennan, Peter Falk, David Niven, and Alec Guinness. I saw a short segment of the film in my early adolescence, but that's about it. This movie would later be ripped off somewhat by the 1980 TV-movie Murder Can Hurt You, which I've written about before.  One notable thing about the packaging of this tape is that the cardboard box (as opposed to a "clamshell" box) has a flap you can close on the side rather than a constantly open slot. Boxes with that flap weren't made for very long and aren't easy to find, although I do have a copy of Dr. Strangelove with the very same box and flap. It must have been common for video released by Columbia Pictures at one time--both Murder By Death and Dr. Strangelove are Columbia video releases. 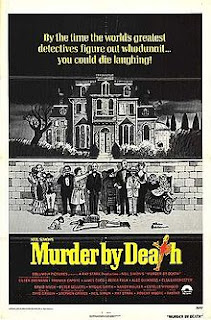 Next is a tape containing two episodes of the Disney/Jim Henson coproduction Dinosaurs, featuring a nuclear family of dinos acting like your typical American sitcom family. This is sure to be a hit with my two little ones, and it was a favorite of my wife when it first aired circa 1990. 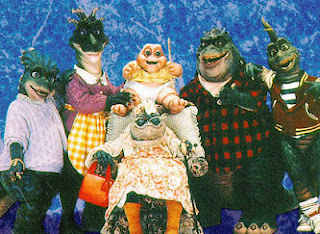 The next two tapes are full Disney productions: The Rescuers, the 1978 film starring the voice talents of Bob Newhart and Eva Gabor, which I don't recall ever seeing, even though I was the target audience when it was first released. The store also had the sequel The Rescuers Down Under, but I didn't want to potentially waste 50 cents on a sequel when the original is yet to be judged. Ever the cheapskate am I! 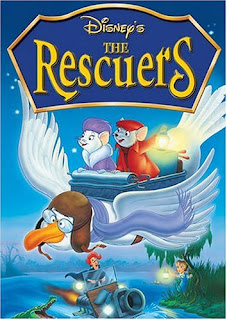 The other Disney film is the original Love Bug, which has always been a favorite of mine from the first time I saw it, and I can't wait to share it with my children. I was determined to drive a car just like Herbie one day, and I haven't yet given up on that dream! 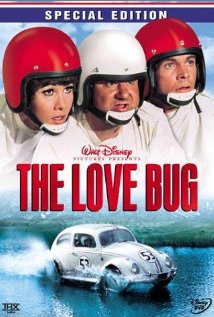 Finally, the tape that is the most obscure of my new collection, and it's a Christmas special--The Gift of Winter. This is a Canadian animated special featuring the same characters from the bizarre yet awesome Halloween special Witch's Night Out, which is one of the first things I ever blogged about. In this one, Bazooey, Small, Tender, and other characters petition Old Man Winter to ease up a bit on the town, but later regret their decision. I have yet to actually see this special, but I'm happy to finally add it to my collection after all these many years. 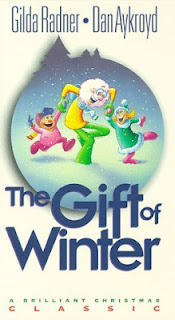 If I have time, I'd like to go back to Goodwill and pick up some more tapes. Two for 99 cents people!
Posted by Phillyradiogeek at 8:26 PM 2 comments:

This week's Tuesday's Forgotten TV-Movie is one that I'm surprised is forgotten, as it was pretty notable at the time. It's the 1994 NBC TV-movie World War II: When Lions Roared.

The movie stars John Lithgow as Franklin Roosevelt, Bob Hoskins as Winston Churchill, and Michael Caine as Joseph Stalin, and focuses on their tenuous relationship during the span of the war. The film is notable for several reasons:

1) It was the first program filmed in (analog) high definition to air on an American network (in this case, NBC). Of course, American TV was still presented in standard definition at the time, so I guess no one noticed.

2) There are only five speaking roles in the entire film: the three mentioned above, plus Roosevelt's foreign policy guru and most trusted advisor, Harry Hopkins (Ed Begley, Jr.) and Stalin's right-hand man Vyacheslav Molotov (Jan Triska).

3) A great deal of the dialogue is taken directly from recorded sources, such as official communiques between the parties and first hand accounts of the events.

4) The film used an interesting technique in which the characters would sit in their offices and verbally state written communication, while the other would appear on a split screen and dictate their reply on the spot, actually looking in the other character's direction as if they were in the same room. The clip below demonstrates more clearly what happens during these scenes.

I highly enjoyed this film when it first aired, but I've never seen it rerun since, and to my knowledge, it's currently out of print in any home video format.

Here is a sample clip below. Thanks!

Posted by Phillyradiogeek at 9:23 AM No comments: