ABC Fall 1971 Promotional Campaign, "The Place To Be"

This is the opening to a film presentation for ABC network's affiliate convention in 1971 introducing their fall lineup. ABC's slogan that season was "The Place To Be." I love the soft, easygoing tone and presentation in this clip; you would never see any of the networks create something like this today, when everything has to be "hot" and "extreme." It captures that laid back feeling that ran through a good bit of mainstream pop culture at the time (think TV as presented by Bacharach and David). Very nicely done!

The title says it all! Thanks to Kliph Nesteroff of the Classic Television Showbiz blog for bringing this to my attention.

Worshipped in geek circles (deservedly so) for his great voice work as the Dark Knight in several animated series and films, it's interesting to see the man behind the voice, especially in other work.

Here he is on the drama Matlock.

Here he is again in a rare comedic turn on Murphy Brown. Quite a different approach than what is needed for the Caped Crusader!

Batman and Murphy Brown--that's a Brave and the Bold team-up right there!
at January 26, 2010 No comments:

Mego Batmobile Commercial from the 70s

Staying with the Batman theme of the last couple of days, here is a cool commercial for Mego's Batmobile toy from the 1970s. Obviously influenced by the 60s TV series, this commerical is a lot of fun, with cool toys to boot!

Batman, "The Yegg Foes in Gotham"

When we last left our heroes, Batman and Robin were in the clutches of villainous Egghead. But wait, "the most eggcrusiating circumstances are yet to come!"

Batman, "An Egg Grows in Gotham" 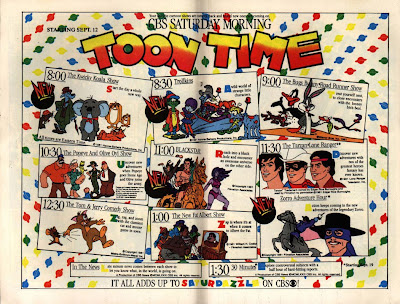 Here once again, we travel back in time to check out a Saturday morning children's schedule of the past. Today we peruse the schedule for CBS in the Fall of 1981!

First up at 8am is the Kwicky Koala Show. Only lasting one season, the character Kwicky Koala was one of the last creations by legendary animator Tex Avery.


Following at 8:30am is the Trollkins, also lasting just one season. I could only find the intro, so this is all you have the judge the quality of the show. I vaguely remember this show, but can't remember if it was any good--I'm assuming not. It appears to be a cross between the Smurfs and the Dukes of Hazzard, if that can be imagined. Ironically, this premiered the same month as the Smurfs.

At 9am, my beloved Bugs Bunny/Road Runner Show!

A full hour and a half later at 10:30am, it's the Popeye and Olive Oyl Show, a shortened version of 1980's All New Popeye Hour.

At 11am was the action cartoon Blackstar. This was just one in a trend of cosmic barbarian series that appeared around this time, such as Thundarr, Herculoids, Masters of the Universe, etc.

At 11:30 was the Tarzan/Lone Ranger/Zorro Adventure Hour by Filmation. Tarzan had been successful on CBS for a few seasons by this time, so Filmation decided to add other classic adventure stars to the mix. Although well done and entertaining, this turned out to be Tarzan's final season and the only season for the Lone Ranger and Zorro.

You have to love William Conrad's reading of the classic Lone Ranger intro!


At 12:30pm (yes, we're in the afternoon now) is, lamentably, The Tom and Jerry Comedy Show. I've ranted about the poor quality of this show before, so I won't do it now. To make it more interesting, I present an installment of the show--in Spanish!

Wrapping things up at 1:30pm is 30 Minutes, a news program aimed at teens that I don't remember and can never find footage of.

And that's the long CBS Saturday morning! Although I always admired CBS for having such a long morning, it didn't always matter, as they often preempted their kids shows for sports in the early afternoon. This must not have been a good ratings season for the network, as most of these shows did not air the next season, as far as I know. I look forward to posting CBS Fall 1982 for comparison.

For today's "Peanuts as Pitchmen" feature, we go to the big gun: MetLife Insurance. They've been pushing MetLife since the mid 80s and are still going stong with them today. Here are quite a few commercials for them, but even these only represent a tiny few of them over the last 25 years. Enjoy!

In my next "Peanuts as Pitchmen" installment, I have two quick commercials for Chex Party Mix. I usually stay away from snack mixes, as they usually throw in something I wouldn't eat otherwise (granola? NO!). Just the usual chips and pretzels for me, thanks.

Next in my "Peanuts as Pitchmen" series, Charlie Brown and the gang promote Dolly Madison cakes and pies, particularly their Zingers brand. Who is the thief stealing the tasty treats? Who else?

The comic strip Peanuts is celebrating its 60th anniversary this year. To note this occasion, and to satiate my fixation with the strip and its characters, I'll be highlighting them here and there throughout the year. Then again, I've highlighted them many times before, so I guess I'm not doing anything different.

This week, I'm spotlighting their use in commercials and advertisements. They've been used to sell many products and services since their inception, but their first major campaign was with the Ford Motor Company. In fact, it was for Ford that the Peanuts gang was first animated, long before their first TV special, A Charlie Brown Christmas. Here are some examples.

This first commercial may be the first animation of them period. By the way, those are chocolate cigars, not real ones.

This time, Charlie Brown gets an assist from Schroeder.

Don't sell advertising on a kite flown by Charlie Brown.

This may be the last commercial the Peanuts gang did with Ford, in 1964.

If you enjoyed these, stay tuned, as I'll be presenting more "Peanuts and Pitchmen" posts throught the week. Thanks!
at January 12, 2010 No comments:

Art Clokey, animator and creator of legendary clay cartoon character Gumby, passed away Friday January 8th at the age of 88. In his memory, please enjoy his first famous animation, "Gumbasia," followed by a classic Gumby cartoon. Thanks!

You know what I would've liked to have found underneath my Christmas tree this past Christmas? Some cool, good condition superhero dolls by Mego. Mego was a toy company, no longer in existense, that made some awesome superhero dolls in the 70s. Every member of Generation X I know had at least one, if not several; I had Spider-Man and the Hulk. They are highly sought after collectors' items today. Here are some commercials from back in the day displaying their awesomeness.

For everything you could possibly want to know about Mego, go to the Mego Museum here.

Have you made a New Year's resolution to be healthier this year? Chances are you have; I know I have. For advice to keep you on the up and up, just heed the word of these children's PSAs from ABC from the 70s and 80s!

Time for Timer! He too sings the praises of a quick breakfast.

Be sure to chew and savor your food so you feel full!

Leave those salty, sugary snacks behind, eat fruit instead!

Finally, don't forget to exercise your teeth! So says the Chopper.

It's been a long time since I posted a La Linea cartoon; here is a double feature. If you don't know what La Linea is, you can read about him and see more of his exploits at my blog here. Thanks!

As seen on the first season of Sesame Street.

It's back to normal here at the blog, as we put the holiday-related posts behind us and go freeform for a few weeks.

Today, we learn that Spider-Man really likes fruit--a lot. At least according to these public service annoucnements from 1980. Thanks to Bill Doughty of the blog Trusty Plinko Stick for bringing these to my attention a few months ago.

Welcome to the new year, everyone! I'm really sorry I haven't posted in so long, but the holiday festivities have been calling all week. I only have time today to wish everyone a happy and healthy new year, and I hope my new readers of the last few months will stick around through 2010 and beyond. I'll be back to a regular posting schedule on Monday, January 4th. Thanks!
at January 02, 2010 1 comment: