The Return of Gino's Restaurants!

I got good news yesterday:  the long dormant fast food chain Gino's is coming back!  One of their new locations will be in King of Prussia, PA, outside of Philadelphia.  I loved Gino's when I was a kid.  There was a location within walking distance from my house back in the 70s, until the entire chain was sold to Marriott.  Many locations were converted to Roy Rogers locations, but there was already an existing Roy's across the street in my neighborhood, so the new owners converted it to a KFC, which it remains to this day.  I'm sure the food won't taste quite the same as it did back then, but I love to see a fond slice of nostalgia come back.

And as always, here are some great Gino's commercials.  Enjoy!

The Fray, How To Save A Life/Snoopy Come Home Mashup

It's been awhile since I posted a Peanuts-related item, something I planned on doing regularly since this is Peanuts 60th anniversary. Here is a cool item I just discovered this morning: a mashup of footage from the theatrical film Snoopy Come Home with the song "How To Save A Life" by The Fray (made popular on Grey's Anatomy). The two things really do work well together, and the song brings out the sad tone that permeates much of the movie (if you've never seen it, you'd be surprised how sad the movie is). Don't let the clip depress you too much, as it really is well done. Thanks!

Not being one to resist giving old broadcasting a plug, I continue my nostalgic trip through Philly TV past, this time with a look at WPHL-TV Channel 17, known in the late 70s and early 80s as "The Great Entertainer."  I didn't watch too much stuff on 17 back in my very early youth, as Channel 48 had the majority of what I was interested in.  Still, there were definitely highlights, some of which I'll spotlight here.

The original Battlestar (I'll stop with the exclamation points).

As far as kids programming goes, I watched the 60s Filmation Superman and King Kong cartoons during the summer in the mornings, and Ultraman, Spectreman, and Speed Racer in the afternoon, but the most important contribution to my childhood that Channel 17 made was airing the 60s Spider-Man cartoon, one of my favorites TV shows ever.  Not just cartoon series, but any kind of series.  When Channel 48 died, much of their equipment and library went to Channel 17.  When that happened, Spidey left 17 and was off the air in Philly until Channel 57 brought it back in the mid-80s.

Today the station is mostly still independent, save for its affiliation with My Network TV, of which I'm not a fan, to put it mildly.  The station, however, does recognize its past with a section of its Web site called "Vintage 17," where you can see the clips I posted here as well as some others.

I apologize to those not interested in my Philly-centric tone of late.  I'll get back to more broad topics soon.  Until then, here is Channel 17, and me, signing off!

In the wake of the sign-off of WKBS-TV in Philly, the city was reduced to two commercial UHF stations for two years before the sign-on of WGBS-TV, "Philly 57."  Formerly the signal was used as an outlet for local cable premium channel PRISM until the license was purchased by the Grant Broadcasting System and relaunched with much fanfare as the city's newest entertainment station.  Although it didn't market itself as the successor to Channel 48, it unofficially took up the old station's mantle.  The station has gone through several ownership changes since its launch; today it is owned and operated by CBS/Viacom as a CW affiliate.

Here are several clips, commercials, and promos from the station's first few years of operation.  For more detailed information on the station, click here.  Enjoy! 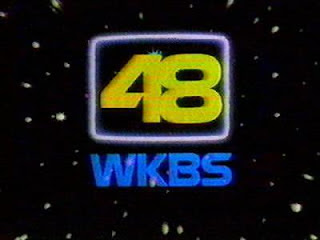 One of my most successful posts on the blog is my article about the late and lamented Philadelphia TV station, WKBS Channel 48.  No matter what I'm currently blogging about, this article is always in the top two or three most read articles at any given time.  As demand for information on the station continues, and as it's been over two years since I wrote the last article, it's high time I featured Channel 48 again.  So without further ado, here goes!

Here are a couple of quick voiceovers between programs.  The second clip is credited to Don Rose, a legendary radio DJ who voiced all of the Field TV stations, but I'm not sure it's him in this case.  The voice sounds a bit high, but his inflections are there.

Going back even before I was born, here are some audio airchecks of promos from 1970. This is before Kaiser Broadcasting and Field Communications merged.

Next is a news brief (featuring future KYW Newsradio anchor Pat Farnack) and even an editorial, something TV stations rarely do anymore.


Finally, here are a few clips edited from viewings of Channel 48's 8:00 movie that aired on weeknights, including station promos and various commercials.


Here is another blog dedicated exclusively to Kaiser/Fleids stations.  Unfortunately, it hasn't been updated in a few years, but the material that is there is good stuff.

Putting my abilities to beat a dead horse to the test, here are yet more Philadephia local TV commercials, this time for Philly radio stations.  There's something ironic about radio stations advertising on TV, but I believe it's integral for a successful radion station.  Here are some great ones, some for statioins still around, others for stations long put to rest.

The beautiful music format tried to make a comeback in teh market in the early 90s on 560 Am, WISH, sister station to B101-FM, a station which formerly held the format.

Speaking of B101, it was known as Easy 101 in its old format. Here it is now, (among some other TV station promos and commercials).

For you rockers out there, here are two spots for 94 WYSP, still a rock station today.


Here's a clip for WIOQ, which was then an AOR station, now a CHR.

After this format, it was an oldies station for a year or so, and a very good one, too.

Speaking of oldies (my favorite format), here are spots for WOGL Oldies 98, still on the air today...

Continuing to plow through as many nostalgic Philadelphia TV commercials as possible, today I present  many short but entertaining commercials for Krass Bros. clothing stores.  Run by charismatic owner Ben Krass, the store was an institution, made famous in no small part by his funny, and somewhat bizarre, TV commercials.  If you grew up in Philly, you know exactly what I'm talking about.  Regardless, take a look!

In a similar vein to yesterday's post featuring Philly local TV commercials, today I present more commercials all from one Philly institution: The Tasty Baking Company, makers of Tastykakes--the best snack cakes EVER!! I grew up--and grew wide--on their delicious cakes, and these commericals helped contribute to their popularity.

To start off, here is a commercial featuring the classic jingle. I'm not the boy featured, but I might as well have been!

Next is an animated commerical I don't remember, but it's cute and has a late 70s/early 80s charm to it.

Here, kids enjoy some great Tastykakes, and learn the penalties in hockey as well. During Flyers broadcasts back in the day, when a Flyer scored, he "scored for a case of Tastykake!"

Here is a set of several various commercials that includes one Tastykake spot. What interests me about this clip: it aired on a Washington D.C. station! I didn't know they were sold that far south of Philly.

Finally, what may be the most interesting commercial of the set. Not only is it in great shape for being over 30 years old, it features a celebrity endorsement from none other than--Betty White! How the hell did that happen?

Email ThisBlogThis!Share to TwitterShare to FacebookShare to Pinterest
Labels: Best of Me and You, commercials, Philadelphia, sports, TV

Today is one dedicated to my fellow Philadelphians. The city is very rich in history, and that includes broadcasting history, one of my favorite subjects. Besides the great stations and personalities that made their way here, even local TV commercials have become popular and well remembered. Here is a sample of some fun commercials Philly folk should remember fondly.

Having car trouble? Try visiting Jimmie's Used Auto Parts, "Home of the happy auto parts!"
"Hey, where did everybody go?" They've gone to Betson's!" Betson's Furniture, that is!

Before moving that Betson's furniture into the house, make sure you first lay down carpet from Big Marty's. Big Marty sells carpets...cheaper!

A great blast from the past for Philadelphia residents is the memory of Frank's sodas. Here is a famous commercial from the 80s that supposedly features Patty Smyth performing. I don't know if that's really her or not; I'll let you be the judge.

Closing out today's post the way we began, with a car maintenance commercial, here is "The Boss's Wife" for Atlantic Transmission. "Don't get frantic; call Atlantic!"
Do you have any suggestions? Let me know in the comments section or at phillyradiogeek@gmail.com and I'll try my best to find them!
at July 13, 2010 6 comments:

Email ThisBlogThis!Share to TwitterShare to FacebookShare to Pinterest
Labels: Best of Me and You, commercials, Philadelphia, TV

Spider-Man Rockomic: From Beyond The Grave

After a week+ long absense, I return to the blog with a cool treat: the 1972 record album Spider-Man The Rockomic: From Beyond The Grave.  This was an LP-size record with an original Spider-Man story and song.  An extremely scratchy copy still exists in my collection I inherited from my older siblings (the accompanying comic was lost to the ages before I can remember), but thanks to a generous YouTube user, I'm able to present images along with the story.  Most comic book fans reading this are already familiar with this and may even have it, but for those for who this is brand new, enjoy!

OK, this is my last Jaws post for awhile, I promise!

As my one final Jaws-related post for hopefully a long time to come, I have two remaining clips for you.  Here is yet another parody of the film's opening scene, and as with my Jaws as Pitchman post before, it's for a radio station.  This clip makes its point very well! Once again, I'm thwarted from embedding a YouTube clip, so please watch it here.

Here is a very abridged animated version of the film.  Unlike most Internet film abridgements, this does not star bunnies.

I'm going to the seashore for an extra long holiday weekend starting tonight.  Everyone have a safe and fun July 4th weekend.  And remember--don't go in the water!
at July 01, 2010 1 comment: