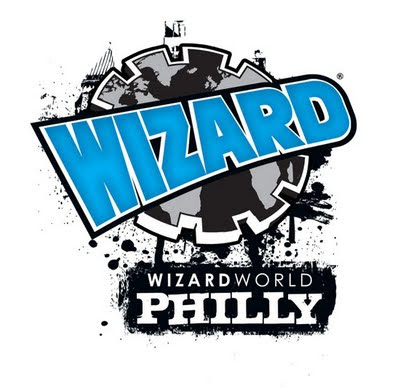 Hi there!  Sorry once again for my absence of late, but the rigors of Real Life has made blogging a luxury.  However, I'm just starting a glorious four-day holiday weekend, so I'd like to take the opportunity to discuss my visit to the 2011 Philadelphia Comic Con, held Friday June 17th!

As much as I love comic books, this was my first time at a major con.  Thankfully, my awesome wife bought me a ticket (via a great discount on Groupon, of all places), and off I went.  My daughter Megan went along for the trip, along with our friends the MacMinns.  Megan was dressed in a Spider-Girl dress, while I went attired in a Hulk t-shirt.

Speaking of the Hulk, he was there, in the form of Lou Ferrigno.  Other celebrities in attendance included Adam West and Burt Ward, Margot Kidder, John Schneider, Vivica A. Fox, Bruce Campbell, and Billy Dee Williams, among others.  I didn't get any autographs, but it was still cool to see them up close and personal.

I also did some shopping.  I bought a hardcover copy of Marvels by Kurt Busiek and Alex Ross for $10, Chew Volume 3 for a bit less than that, Essential Savage She-Hulk (don't judge me) for $7, as well as some DVDs, including the TV version of the Broadway musical It's a Bird, It's a Plane, It's Superman (Megan was interested in seeing it) and the infamous TV special Legends of the Superheroes (which I may discuss in a future post).

I received some comp copies of new books courtesy of Philly comic publishers 215 Ink, for which I'm very appreciative.  I hope to give reviews of their books very soon.

Finally, I picked up some nice artwork for myself and the kids.  I got a print of Wonder Woman for Megan and Batman for my son Brian for only $5 a piece thanks to artist Alan Schell, who also gave us a free copy of a comic he illustrated, Oz/Alice in Wonderland.  You can see his work at his Facebook page and his DeviantArt page.  Check him out!

Finally, I got my very first con sketch, from artist TL Collins.  I was especially looking forward to getting a sketch, as I had a particular subject in mind.  I'll save what it is for another post I want to write soon.  In the meantime, you can check out Collins' web comic Bullfinch three times a week.

Here are Megan and I enjoying some cool cars at the show.  We both had an awesome time.  I hope to make this an annual event. 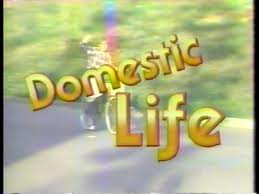 "Time to make the donuts!"  That became a big catch phrase thanks to the extensive TV advertising of Dunkin' Donuts.  The company's made some great commercials over the years as well as donuts.  The most memorable are probably those starring Fred The Baker, played by actor Michael Vale; here's a small taste of his work.
I love the slap he gives his coworker in the middle of the commercial! 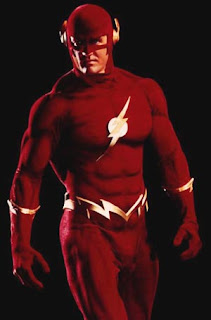 Yes, after a couple weeks absence, I'm back!  And today, I remember the one-season wonder, The Flash.
The Flash aired on CBS Thursdays at 8pm during the 1990-1991 season.  The network had high hopes for the comic book-based series, as the first Tim Burton-Michael Keaton Batman film had been a monster success in theaters the previous year.  Despite anticipated audience carry-over, a big budget, and early media buzz, the show didn't make it past its first season, thanks in large part to its heavy competition in that time slot--NBC's The Cosby Show and Fox's The Simpsons.
Why, even Mark Hammil appearing twice as the villian the Trickster couldn't save the series.  How could that costume fail? 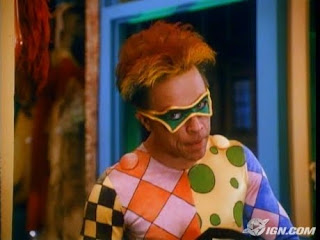 I enjoyed the show quite a bit, as it had a good mix of action, humor, suspense, and even romance between soap star John Wesley Shipp as Barry Allen/Flash and Amanda Pays (ABC's Max Headroom) as his love interest.  The series was released on DVD in 2006 but I believe it's no longer in print.  It is, however, available for purchase on Amazon and iTunes.

Right here is the show's intro and outro.

I was inspired to post about this particular series because I'm pysched up for this year's Philadelphia Wizard World Comic Con this weekend!  I'll be there Friday night.  It will be my first big comic con ever.  I can't wait!
at June 14, 2011 No comments: 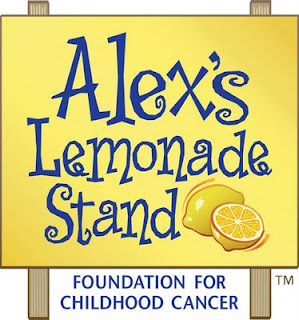 Hey, remember me?  I've very sorry for not blogging for almost three weeks.  I've been extremely busy with things both work and family related, and it's not over yet.  Here's hoping July and August will be more productive.

However, I couldn't let this week slip by without once again mentioning this year's Lemonade Days, the biggest weekend of the year for Alex's Lemonade Stand Foundation.  If you're not already familiar with this excellent organization, please go to their site for more info as well as the video below.  My wife just ran yet another successful lemonade stand at her elementary school where she teaches, and many other wonderful people around the country will do the same over the next three days (and all year long!).  If you see a lemonade stand in your area, please give what you can, or donate online.  Every bit helps to fight childhood cancer--one cup at a time!