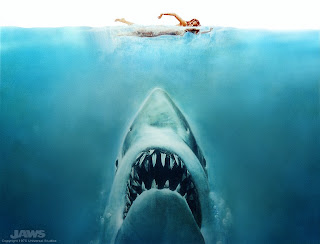 Now that Memorial Day weekend is behind us, it's summer in most people's minds, if not according to the calendar (we still have three weeks to go there). If you live along either coast, one of the top places to enjoy the season is at the seashore, home of surf, sand, and in some cases, great white sharks waiting to devour humans.

That's what some might fear, at least. For that we have to thank the classic film Jaws. You remember how it terrorized many a summer movie goer:

So chilling, that many a moviemaker has tried to imitate it, with little if any success. Orca (featuring a killer whale) and Piranha (featuring, well, piranha) are two notable examples of copycat carnivores, but the most obvious Jaws ripoff is the 1982 film Great White, also known as The Last Shark. This film was such a blatant copy of Jaws that Universal Studios sued the film's makers for copyright infringement and won. The film was pulled from theaters only two weeks into its release, and has never been issued on any home video format in the US (but it has been available in foreign markets for years).

Both films have a do-gooder trying to save the town, a politician reluctant to solve the problem (the mayor of Amity in Jaws, a gubernatorial candidate in Great White), and even a shark hunter who speaks with an accent (Robert Shaw in Jaws, and Vic Morrow in Great White). For more similarity, see this trailer for Great White:

The last image of the trailer is the same as the movie's poster. Both films' posters feature a beautiful woman about to get chomped by a giant shark from below. And did you listen carefully to the narrator compared to the narrator of the Jaws trailer? It's the SAME FRICKIN' NARRATOR IN BOTH TRAILERS!!

For more information about Great White, simply enter it into a search engine; there are articles about this film all over the place.

Aw, heck, click here for the whole darn film (their used to be an embed code for this link, but it's no longer there):

Next I have two examples of Jaws imitators who do so not for profit, but for fun. Here enjoy this homemade trailer for a romantic comedy that doesn't exist, but should: Must Love Jaws.

Finally, here is an awesome homemade film that was created all the way back in 1978, by two 12-year-olds no less! The film is simply titled "Shark." It's nearly 10 minutes long, but worth watching every second. An excellent job!

In honor of all Americans who gave their lives for our country, I present this moving collage of photos set to a musical version of the famous poem "In Flanders Fields." Although not written for American soldiers specifically, the feeling of the poem certainly applies. You can learn about this poem here: http://en.wikipedia.org/wiki/In_Flanders_Fields

Indiana Jones and the Blog Post That Rode His Coattails 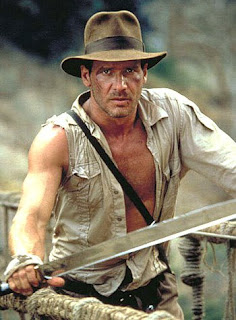 Indiana Jones and the Kingdom of the Crystal Skull opens at midnight tomorrow night. The long-awaited sequel is finally seeing the light, and tens of millions of people are sure to see it this weekend. The previous Indiana Jones films are some of the most popular motion pictures ever; certainly with me, an avid Indy fan. Heck, who isn't?

Philadelphia Inquirer movie critic Carrie Rickey, for one. In the Sunday May 18th edition of the newspaper, on page 1 of the Arts & Entertainment section, Rickey outlines her reasons for her Indy irritation, which can be broken down to these bullet points:

1) the films paved the way for the "dumbing down" of action films;
2) increased the tempo of today's films through the use of rapid-fire action;
3) "perpetuated colonialist stereotypes;"
4) marginalized women, similar to the role they play in James Bond films

Personally, the only point I find that may have some merit is the one regarding stereotypes, as it's true that ethnic protrayals can border on the stereotypical. Other than that, I think her points, while intriguing, are boulderdash, poppycock, and hogwash.

The Indiana Jones films are anything but dumbed down; I find them to be quite smart and intricate. There is plenty of fast-paced action to be sure, but there are also plenty of scenes that are far more subtle and sobering (Indy and Belloq's tense discussion at a Cairo cafe from the first film comes to mind). And more films should have strong female portrayals as Karen Allen's performance as Marian in Raiders (a point even Rickey herself concedes). Kate Capshaw's role in the second film was light, yes, but a slap in the face of all women? Hardly.

I've always respected Rickey's reviews, and still do, and I don't mean to invalidate her opinions here, but I also felt the need to counter them, at least a little.

To be fair, here is the link to the entire article. My very brief description doesn't really do Rickey justice.

And lest you think I've gone all cerebral and intellectual on you (Heaven forbid), here is some of my usual YouTube fodder.

A commercial for Kenner's Indiana Jones large-size Indy figure, which I don't remember:

See you this Memorial Day weekend (unless you're vacationing, in which case I'll see you next week), when I hope to have a proper Memorial Day tribute. Thanks!

If you like that rock'n'roll stuff the kids are always listening to, like I do, you will be amazed by this.

Have you heard the classic rock song "Carry On Wayward Son" by Kansas before? Of course you have. Have you heard it played solo by a grade-school age Japanese girl on an electric synthesizer before? Not like this. You go, girl!

In Defense of Ewoks

Hello everyone! I'm sorry it took a week for me to post again, but things have been busy in the geek household this week. First off, a Happy Mother's Day to all the moms, moms-t0-be, grandmoms, nanas, mother figures, and of course, my wonderful Mom, Mom-in-law, and beautiful wife and mother of my children.

This leads right into my discussion of Ewoks (naturally).

This year is the 25th anniversary of the release of Star Wars: Return of the Jedi (Episode 6 if you're counting). This installment of the saga introduced the little furry characters known as Ewoks. Many hardcore Star Wars fans were turned off by the inclusion of the Ewoks, regarding them as silly and nothing more than characters for young children to enjoy. Personally, I've never understood the derision. Yes, they were for the kids, but the films have always been intended for a family audience.

Andrew Zilch is also mystified by the Ewok-haters. Zilch is an independent film producer and director and part of an Internet comedy troupe called Runaway Box. One of his contributions to the troupe is this lovely hymn defending the honor of the Ewoks. This is awesome, and it features a surprise appearance by a legendary Star Wars figure.

Andrew can also bee seen in one of my Valentine's Day posts; he appears as the character Marty in one of the love ballads there (Feb. 11th post).

For any other Ewoks fans out there, here is an entire episode from the mid-80s animated series that appeared on ABC:

Finally, here is the classic Ewoks celebration song from the original version of Return of the Jedi--sung barbershop quartet style. Makes sense.

Well well well, looks like Iron Man had a great weekend. It grossed over $100 million! Nice work. So nice, Marvel Comics has already announced a sequel, along with several other new film projects, including classic Marvel heroes Thor, Captain America, and The Avengers. Check out this report from the Associated Press:

Thor appeared in an Incredible Hulk reunion TV-movie in the late 80s. Captain America appeared in a bad TV series in the late 70s as well as a bad direct-to-video feature film circa 1990; The Avengers had a brief animated series in the 90s on the UPN network. Hopefully these new projects will be bigger and better than what has preceded them. Fortunately, as with Iron Man, Marvel itself produced the film rather than licensing the character to outside forces, so that may help ensure quality control.

Getting back to Iron Man, here are the cover images I promised last week: 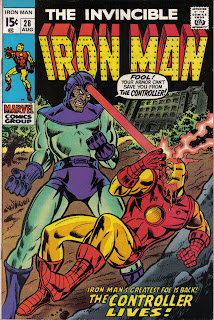 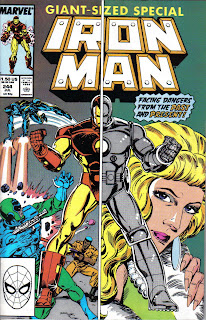 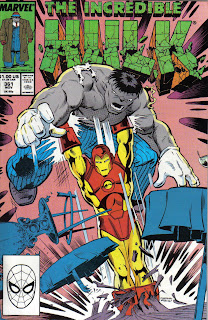 Lastly, here is what is technically a Captain America cartoon, but features Iron Man and the other aforementioned characters appearing together. Like my previously posted Iron Man cartoons, this is from the Marvel Superheroes Hour TV series from 1966.

In case you haven't noticed, the film Iron Man opens this Friday, May 2nd. I'm a lifelong comic book/superhero fan, so I'd love to see this film (as I stated in my Summer Movie Preview). For those unable to make it to the film, or are new to the character, here is a free sampling of ol' Shellhead, as he's affectionately called, in previous media.

Here is an Iron Man comic from 2004 that can be read online:

From the 1966 (barely) animated TV series Marvel Superheroes Hour, here is Iron Man in "Enter Hawkeye," including another Marvel character named, coincidently, Hawkeye. The video quality after all these years is not great, but the quality wasn't great back in the day either.

Here Iron Man fights "The Crimson Dynamo." The video is a bit better here, but the audio isn't great.

Below enjoy "The Other Iron Man:"

This is the opening sequence for the 1990s UPN Sunday morning animated series:

Once again, the trailer for the new film:

Finally, you can't mention Iron Man these days without thinking of the classic Black Sabbath song of the same name (and Ozzy makes his first appearance on my blog!):

That's all for now. I may scan and upload some of my Iron Man comic book covers this weekend if I get the chance.

Now get to your local theater!

I almost forgot: this Saturday is Free Comic Book Day! Get to your local comic book store before the theater!
at May 01, 2008 3 comments: