Tuesday's Forgotten Film: The Wizard of Speed and Time (1979) 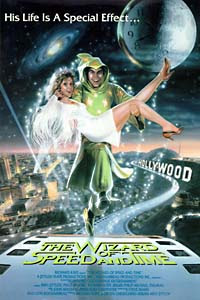 This week's Tuesday's Forgotten Film is a short one, both in the film length and the length of this article.

The Wizard of Speed and Time was a short film (three minutes long) that was created in 1979 and aired on TV as a segment of The Wonderful World of Disney. Special effects technician Mike Jittlov stars as the titular Wizard who speeds through Southern California wowing bystanders (especially the ladies) until he slips on a banana peel, hurling him into the sky and smack dab into the Magic Kingdom at Disney World. Unharmed, he sallies forth with a song and dance routine: his singing, and dancing provided by movie cameras, lights, and other film equipment.

Jittlov later created a full length feature based on the concept, filming it in 1983 but not released until 1989, and even then only in limited release. Here I feature the original 3-minute short. Enjoy! 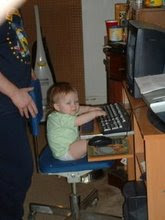 I haven't posted a List O' Links in awhile, so how about now?

The ever eloquent Chris Sims of Comics Alliance answers that musical question: What's up with '90s comics?

Lists of "the greatest this" and "the greatest that" are always controversial, and this one is sure to continue that trend, but what the hey. Here are, according to Creative Bloq, the top 20 iconic movie posters of all time.


Finally, a salute to the various styles and actresses who have portrayed Catwoman over the years. Because hey, it's Friday and why not? We're well into the summer season now, which means many of us are getting deep into our usual summertime activities, such as the beach, camping, sports--and sharks.

Yes, summer is the season of the shark, thanks to Jaws and other shark-related fare such as Discovery Channel's Shark Week. But not all shark projects are created equal.  Case in point--this week's Tuesday's Forgotten Film, Cruel Jaws.

Released in 1995, Cruel Jaws is arguably the worst shark film ever made. That's saying something, considering how many God-awful shark movies exist, as anyone with SyFy on their cable system will admit.  But even in this crowded genre, Cruel Jaws is a standout, not just because the acting is terrible (which it is), and the story is stale and tired (which it is), but because it blatantly, callously, shamelessly, and most of all, obviously steals footage from previous shark movies.

The original Jaws? Yep. Jaws 2? Yep. It even steals the orchestral score of other films, including Star Wars. Star Wars music? In a shark film? Yep.

The one film whose footage gets devoured by Cruel Jaws the most is a movie I've written about before, the 1981 film Great White, aka The Last Shark. What is ironic is that Great White itself is a blatant rip-off of Jaws. Cruel Jaws is a rip-off of a rip-off! And the shark from Great White isn't even a scary looking shark. 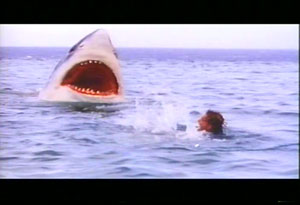 That shark has about as much bite as Jabberjaw.

The auteur behind this travesty is Bruno Mattei, who is notorious for this sort of thing. Cruel Jaws was just another in a line of Mattei-created films that stole footage from existing movies, which has made him somewhat of a cult film lover's hero (or fool, depending on your point of view). Mattei is so brazen that he actually released the film under the title Jaws 5 in some countries! 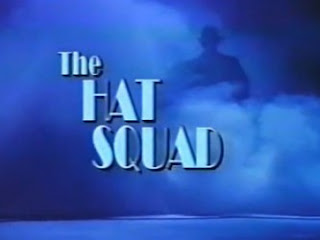 If you appreciate your crime drama served with a sense of fashion, you will appreciate this weeks' Tuesday's Forgotten TV, The Hat Squad.

The Hat Squad was a series about three orphaned boys whose parents all died as the result of violent crime. They are adopted by LA police officer Mike Ragland (James Tolkan) and his wife, who both regale the boys with tales of the "Hat Squad," the real-life unit of the LA police force that existed in the 50s.  The boys grow up to become policeman themselves and informally resurrect the squad, even wearing tailored suits and large fedora hats like the original squad, in the hopes of fighting crime the way it was done back in the day as well as avenge their parents' deaths.

The series, created by the late Stephen J. Cannell, didn't connect with viewers during the 1992-1993 TV season, and only 11 episodes aired. However, YouTube being the godsend it is, here is a clip of an episode. Enjoy! 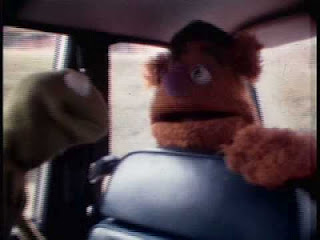 If you're like me (and you must be, because you're reading this blog), you're a huge fan of the Muppets, especially from their prime in the late 70s/early 80s. In that case, you'll love today's clips.

The following are screen tests conducted my Muppet Movie director James Frawley for the 1979 film. The tests feature Kermit, Fozzie, Miss Piggy, and Sweetums in improvised Muppet mayhem. These are a real treat. Enjoy!

Everyday Hulk: In The Bathroom 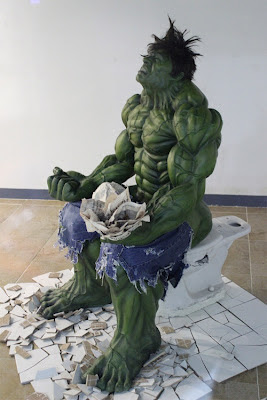 It doesn't take a crisis-level threat like Loki to make the Hulk angry--just watch him run out of toilet paper!

This is a great animation by David Stodolny. Watch his other stuff at artofstodoe.blogspot.com. Thanks!

Tuesday's Forgotten Film: Once Around 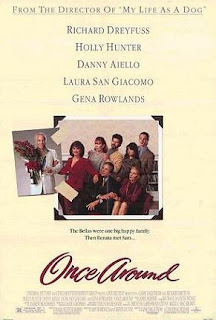 Getting right to it this week, Tuesday's Forgotten Film is the 1991 romance Once Around. Wikipedia has a very good summary of the film, so I'll just let them do the talking:

"The Bellas are a proud family of Italian Americans living in Boston, Massachusetts. Joe (Danny Aiello) is a soon-to-be retired construction worker and his wife Marilyn (Gena Rowlands) a home-maker. Their oldest son Tony is married, while their youngest daughter Jan (Laura San Giacomo) is about to tie the knot herself. This leaves Renata (Holly Hunter), the eldest daughter, feeling upset and confused as to what the future may bring. After learning that her boyfriend Rob is not planning on marrying her, Renata leaves him for good.
She winds up meeting a charming, albeit abrasive salesman named Sam Sharpe (Richard Dreyfuss, who also co-produced). The two begin a courtship but Renata's family is skeptical of Sam from the get-go, especially Jan. Their parents, Joe and Marilyn, are more easily manipulated by the fun-loving Sam, who has given their daughter a happy, up-scale life. But even they come to resent his uncouth behavior, chain-smoking and constant meddling."
The scenes in which the relations between Sam and the Bella family can be uncomfortable to watch, but that's the point. Sharpe is at times very charming and friendly, at other times pig-headed and petulant. In the end, his warm side wins the day (no surprise there) and the film has a bittersweet ending and leaves the viewer satisfied.
The film is readily available on DVD. You can sample the film's trailer below. Thanks! 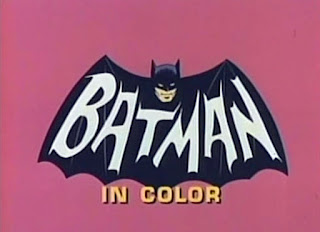 Welcome to a brand new week, folks! The first day of the week is always a great time to make a new start and maybe learn a few things.  What better way to get an education than with Batman and Robin?

Here, in late 60s animated form, the Dynamic Duo teach us up, over, around, and through, then show us why it's dangerous to cross in the middle of the street--especially if you're the Joker. These two quick segments aired during the very first few seasons of Sesame Street. 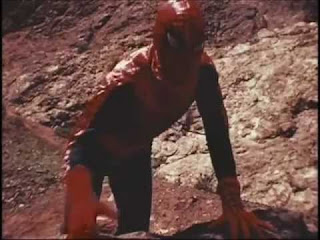 I was reluctant to post this at first, since this is appearing all over the Web lately, but then I figured, what the hell? Stuff like this is exactly what this blog is all about, so why not feature it?

Here is an 11-minute fan film of Spider-Man made way back in 1969. The maker of this film, Dan Glut, went on to become a TV writer for Spider-Man and His Amazing Friends, as well as Transformers. I guess we can consider him a pioneer in fanboydom.

Enjoy, and have a great weekend! Keep cool! 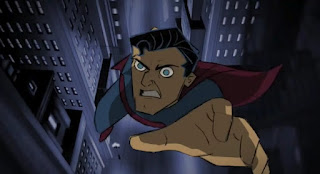 I hope everyone had a great Fourth of July this year and that you are safe and sound today!

Today I offer two fantastic fan-made cartoons. They are made to emulate the classic style and tone of Superman projects of the past, especially the Fleischer cartoons of the '30s, from which the musical score for  these cartoons are derived. They are very brief, unfortunately--I wish the creator, Robb Pratt, would make longer versions--but they are awesome!

Spider-Man: The Capture of Captain America

Happy Independence Day everyone! I hope you all get a chance to relax and enjoy the day with your families, and appreciate the freedom we experience, because there are many others on the planet who don't have that experience. I also hope the day mobilizes you to act on the values you hold dear to continue to make America a great country.

My way of doing that--blogging about Spider-Man. God bless America!

I wanted to continue to keep the patriotic theme going this week, but with a brand new movie featuring my favorite superhero opening yesterday (and his 50th anniversary coming up next month), I wanted to acknowledge that as well. I think I've found the perfect solution to kill two birds with one stone.

Today I present to you an episode of the 1981 syndicated Spider-Man cartoon. This forgotten series existed for a year before the debut of the much more popular series Spider-Man and his Amazing Friends that aired on NBC Saturday mornings in 1982. In fact, I didn't know it existed until a few years ago!

In this episode, it's up to Spidey to locate the kidnapped First Avenger himself, Captain America! See where the patriotic theme comes in? Cap's captor--the Red Skull, of course. Can Spidey take on the Nazi menace and save ol' Cap from certain doom?

Of course he can. 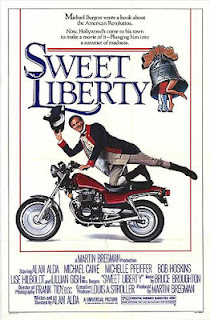 Continuing my (sort of ) patriotic theme this week, Tuesday's Forgotten Film this week is the 1986 comedy Sweet Liberty.

Writer/director Alan Alda stars as Michael Burgess, a history professor who has written an acclaimed book on the American Revolution. When a slick Hollywood producer comes to his town to make a movie version of the book, Burgess's life is turned upside down. His serious book is turned into a sleazy tale of sex and violence--because Hollywood always likes that stuff. Burgess's personal life is also impacted, as he and his girlfriend become attracted to the lead actress and actor in the film.

The film often tries way too hard to be wacky to the point of falling flat, but Alda is affable enough to hold the viewer's interest. Don't expect the satire to be terribly harsh, but for a lazy afternoon or evening's viewing,    you can do worse than Sweet Liberty. The film also stars Michael Caine, Bob Hoskins, and Michelle Pfieffer. If you look closely in the trailer below, you will also see John C. McGinley from Scrubs as well. 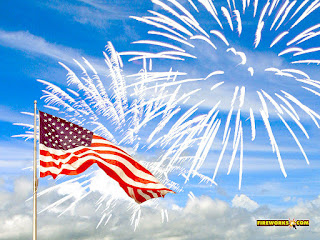 For obvious reasons, I've decided to go the patriotic route this week. To start, here are some great songs to put you in the spirit of the holiday. Enjoy!