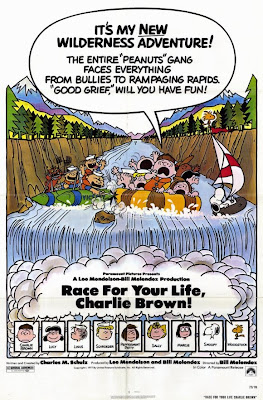 As the summer of 2013 winds down, I'm featuring a summertime family adventure for Tuesday's Overlooked Film--the 1977 animated movie Race For Your Life, Charlie Brown.

In this, the fourth theatrical film featuring Charles Schulz's Peanuts gang, the kids are off to summer camp where they face a small band of bullies in various competitions, the most grueling of which is a days-long river raft race, complete with construction zones, thunderstorms, cheating on the part of the villainous bullies, and the gang's own ineptitude. Will they overcome these obstacles to come through in the end, or will good ol' Charlie Brown let his friends down yet again?

As a lifelong Peanuts fan, this was always one of my favorite kids movies. I had a VHS copy that was worn out that I haven't had in at least twenty years. Just the other day, I was helping my wife, a schoolteacher, prepare her classroom for the new year and came across the film on a much better VHS copy she inherited from a retired teacher. Like manna from Heaven! I was thrilled to find it and share it with my kids this weekend.

You can share the film with your kids too--or just yourself!--by watching the film in its entirety on YouTube. Enjoy!


Just for gits and shiggles, here are a couple of fun images related to the film.

A photo of the original videodisc version of the film from the early 80s. Remember those? 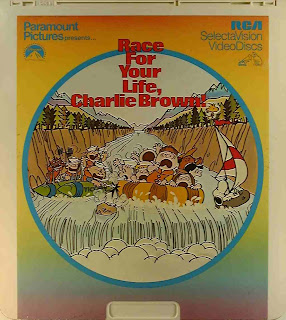 Up next, a poster for the film created and released in Poland with original artwork based on Schulz's character design. It almost looks expressionist or something. I like it! 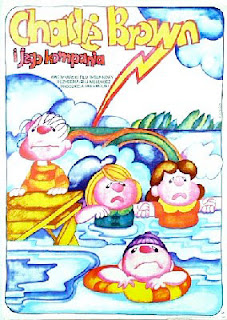 Finally, a poster from Japan, featuring artwork taken directly from the film, but with its own special design. Very cool! 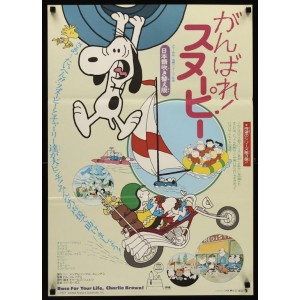 This week's Tuesday's Overlooked TV is an obscure choice, but a fun one--the late 70s children's series Marlo and the Magic Movie Machine.

The character Marlo was a man who worked in the basement of a computer company, banished there after falling out of favor with the gruff owner of the company. Marlo would be bossed around during the day, but after hours, Marlo would sneak off to his secret area where he would interact with the Movie Machine, which Marlo built from the company's spare parts. In addition to sharing conversation with the machine, it would display short clips and features from various sources and play different games with Marlo and the viewing audience.

Marlo was a production of CBS affiliate WFSB in Hartford, CT, then picked up by a handful of other stations across the country. The series only lasted from 1977 to 1980 and wasn't exactly a pop culture phenomenon, but it has a small group of fans. For years I remembered Marlo himself and the Machine, even if I couldn't remember the actual clips or even the title of the series. As the series was the production of a CBS affiliate, I probably saw it on WCAU Channel 10 here in Philadelphia, likely paired with the channel's local production The Candy Apple News Company.

Here is the series intro. Enjoy!

I'm all over the flippin' Internets!

Not only can you find me at the blog, I'm everywhere on the Internet! In case you're keeping score, here's the rundown of the Me and You Internet Empire!

If you're the tweeting type, you can follow on me Twitter by clicking the button on the right or right here.

For those of you who have a Google+ account--which, I can attest to, is a small number--you can add me in your circles here.

You may remember a site called Formspring, in which you could solicit questions from your social media followers or ask them questions. They almost became extinct earlier this year but got a last-minute reprieve. They have now renamed themselves Spring, and you can ask me a question here.

And the biggest news of all--I'm now on Instagram! The picture sharing site has taken the virtual world by storm, and you can follow me here.

For the third week in a row, Tuesday's Overlooked Film in an aquatic one. This week, it's the 1964 Don Knotts vehicle The Incredible Mr. Limpet.

Knotts plays the titular Henry Limpet, who attempts to enlist in the Navy, along with his buddy, days before the attack on Pearl Harbor. Declared 4-F, a despondent Henry stares into the ocean below a pier and says "I wish, I wish, I were a fish," then suddenly falls overboard into the sea, finding himself turned into a fish.

As a fish, Henry befriends a female fish who he uncreatively names Ladyfish, and a crab whose personality lives up to his name. Together, they discover Henry's ability to propel large objects with a sonic sound he generates, which proves useful against Nazi U-boats.

Yes: it's fish vs Nazi U-boats. And that is awesome.

The film was a perennial on TV when I was a kid, and I always looked forward to it. I found it's blending of animation and live action ahead of its time, even though it really wasn't. Still, the film is a lot of fun and a fine choice for family viewing. It's not only available on DVD, but in Blu-Ray as well.

As I'm sure Discovery Channel has let you know, this week is Shark Week, their annual week-long marathon of shark-related programs. As a big fan of sharks myself, I have no qualms about riding the shark zeitgeist. Therefore, Tuesday's Overlooked Film is the 1971 documentary Blue Water, White Death.

The film tracks the efforts of underwater photographers Peter Gimbel and the legendary Ron and Valerie Taylor to film the great white shark, one of the first attempts to do so. Audiences were amazed at the sight of these creatues up close, making stars of the Taylors. They would later go on to film the live action footage for Jaws and other films. Even with all the seemingly thousands of shark films available today, Blue Water, White Death remains a landmark of nature filmmaking.

You can enjoy the film in its entirety here. Thanks!

Hey all! Last week's Friday Night Dance Party was such a success that we're bringin' it back this week. 1, 2, 3, 4, get your woman (or guy) on the floor and get down with your bad self. HOOOOOOOOOOOO!