Who is Elmer Lynn Hauldren?  He's this guy.

Yep, he's the Empire Carpet guy. His grandfatherly voice and gentle style have made him famous as the spokesman for Empire Carpet. The business started in Chicago and spread nationwide. Sadly, Hauldren died this past Tuesday at the age of 89. Certianly he will be remembered as an advertising icon much like Mr. Whipple or Madge the Palmolive lady. RIP.


UPDATE AS OF 7/22/2011: I've been contacted by the Empire Today carpet company and been informed that they have created a special tribute Web site in honor of Mr. Hauldren.  Please go to http://www.empirecarpetman.com/ to learn more about him and hear their famous commercial jingle--which was written by Hauldren himself!  Special thanks to Empire Today for letting me know about this and for appreciating my tribute!
at April 28, 2011 3 comments: 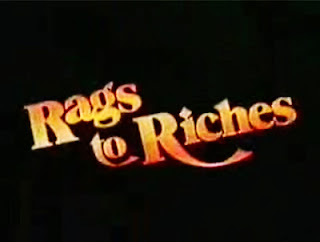 Hi, remember me?  I'm back from my trip to Walt Disney World (which I may blog about in the near future), and I look forward to getting back into the swing of things here.

For this week's overlooked audio/video, I choose a particular childhood favorite of my wife's:  the short-lived NBC family musical series Rags to Riches.  The series, set in the early 1960s, starred longtime character actor Joe Bologna as Nick Foley, a self-made millionare and confirmed bachelor who takes in five orphan girls as a ruse to help him appear as a family man to close a lucrative business deal.  Although Foley only intends to keep the girls temporarily until the deal is sealed, the crusty man's heart falls for the girls and he adopts the girls permanently.  Throughout the series, the girls (and sometimes Bologna) would burst into song using classic pop songs from the era to desribe their feelings or thoughts.

Although the series had a loyal following, the series was never highly rated, and was cancelled during its second season.  But thanks to the Internet, you can enjoy the pilot right here!  Fans of Glee or High School Musical (don't know how many of those read this blog, if at all) would have loved this show.

Here is another family-oriented Easter offering, and my favorite of the bunch this year.  Billy, Jeffy, Dolly, and PJ meet the Easter Bunny himself (voiced by the late Dizzie Gillespie) in A Family Circus Easter.

And that's it for my Easter programming this year.  As I've said before, I wanted to get it out early as I leave for Walt Disney World with the family tomorrow and won't return until late next week.  I'll be off the grid until at least then, so if you don't hear from me beforehand, Happy Easter!
at April 13, 2011 4 comments:

Even the Easter Bunny Gets Angry

It's true! You don't want to piss him off. Just take a look below.

That was nothing compared to what EB dishes out here. Put Peter Cottontail in a Quentin Tarantino movie, and you might get this.

You better be good, for goodness sake!

Keeping it for the kiddies again (it's hard to find grown-up Easter stuff), here are the Cadillac Cats (from the 80s Heathcliff syndicated cartoon) learning the story of how the Easter Bunny got involved with Easter eggs in "Cottontails, Chickens, and Colored Eggs."  Enjoy!

Today's post is strictly for the kids. Bring them up to the PC or Mac and let them enjoy Yogi The Easter Bear, featuring the titular bear subbing for the Easter Bunny. With the recent theatrical film now available on DVD, there may be an uptick in interest for the smarter-than-the-average bear. Enjoy!

What, Easter already? Actually, it's not until April 24th, but as I'll be away for awhile on a family trip to Walt Disney World, I won't be posting much later in teh month. Therefore, I'm showcasing this year's Easter stuff a couple weeks early. As usual when starting holiday programming, I'll kick things off with some classic TV commercials.

And what a surprise, a Carvel ice cream cake commercial, this time featuring Cookie Chick.

Everyone loves the Cadbury creme egg Easter Bunny, so why would anyone want to replace him?

Lastly, here are three spots for the Dudley line of Easter egg dyeing kits. They haven't advertised on TV for ages, but back in the day they were all over TV around Easter time. These kits were very involving, with a whole line of characters (garishly designed) and came with many gizmos and gadgets. Wow, seeing the costumed characters after all this time, I see they were even goofier looking than I remember. Ah, the late 70s/early 80s!

I used to have a Bosley Bunny hand puppet!

A Look at All-Time TV Classics

In case you couldn't guess, I loves me some classic TV, as I think most people do.  Since I often post classic TV posts here and there, I thought I'd take an opportunity to really showcase some all-time great TV shows and moments that are a part of American pop culture.  Enjoy!