Thanks to web site Geek Tyrant.com (http://geektyrant.com/2009/05/6983/), I've come across this awesome movie trailer for a film that appeared at this year's Sundance Film Festival. It's called Dead Snow, and it's about...Nazi zombies.

As I recently discussed in my summer movie preview, a G.I. Joe live action film is slated for release this August. Just today, a new poster advertising the film was released. The poster features characters such as Duke, The Baroness, and possibly the most popular character from the 80s toy line/TV cartoon, Snake Eyes. For those interested, here 'tis! Thanks to GeekTyrant.com for the image. 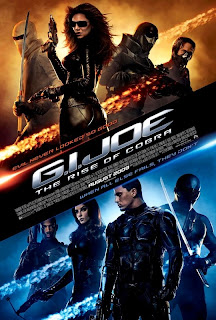 Of course, if you prefer your G.I. Joe "old school":


Or if you prefer your G.I. Joe really old school:

What Have We Learned, Charlie Brown?

Happy Memorial Day weekend everyone! I hope everyone is having fun during this unofficial start of summer. As everyone has fun and enjoys themselves, please remember the reason for this day.

As a reminder, I highly recommend watching this delightful special (although I say that about many Peanuts specials). In this one, a sequel of sorts to the 1980 feature film Bon Voyage, Charlie Brown, the Peanuts gang leave Europe for home (long story--see the movie) when they find themselves at not one but two significant places in military history--Flanders Field of World War I, and Omaha Beach of World War II. It's a poignant, sobering special that conveys the sacrifice of the brave souls of both of these hallowed grounds in a way viewers of all ages can understand and appreciate. If you can, please take a half hour of your time for this wonderful and rarely seen program.

Now that I've discovered the phenomenon that is Twitter, I may become as cool as Andy Milonakis--but probably not.

Kool Kojak and Andy Milonakis "Let Me Twitter Dat"
Uploaded by DowntownMusic. - Watch more music videos, in HD!
at May 21, 2009 No comments:

The title of this post pretty much says it all. It's making the rounds all over the Internet, so it might as well make its way here. Coming May 26th to a video store or Netflix near you: Mega Shark Vs. Giant Octopus. 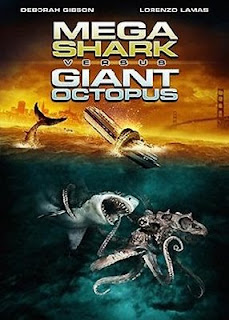 And that's not even the best part.

The B-movie gods have smiled on us! Here is the awe-inspiring trailer.

This is the movie Snakes On A Plane wanted to be but couldn't. Bad movie fans rejoice!
at May 20, 2009 No comments:

Here are promos for CBS's fall lineups for 1978 and 1979. CBS was highly successful at this time, with hits such as All in the Family, M*A*S*H, The Incredible Hulk, The Jeffersons, and Dallas, just to name a few. These years are right at the end of CBS's status as "The Tiffany Network," just a few years before NBC would be resurrected from the dead thanks to The Cosby Show and Cheers. I love this era of TV, not just because it was my first exposure to the joy that is (or at least can be) TV, but because TV still seemed big and eventful, that it "mattered," before the ubiquity of cable and the Internet. There's very little about TV today that is really exciting anymore. *sigh*

In 1978, CBS's slogan was "Turn Us On, We'll Turn You On." Here is a sample of what they thought turned America on back then.

Tonight is the season 5 finale of Lost, one of my favorite shows. In honor of this milestone, I present an interview actor Michael Emerson gave for the new program Late Night with Jimmy Fallon. Emerson first received notice as a villian on The Practice and has achieved equal notoriety as the cryptic Benjamin Linus on Lost. The highlight comes at the end of the interview, in which Emerson gives a pseudo-chilling rendition of the classic children's rhyme "Little Boy Blue" Benjamin Linus-style. Enjoy!

Yes, I've finally caved (or gotten with the program, depending on your point of view). I've joined Twitter. I tend to avoid other forms of Web-networking such as MySpace and Facebook (I'm not a fan of those services for some reason), but Twitter seemed like a good way to post something everyday even if I don't have a full post for the blog. Please check it out at the right, and please follow along on the main Twitter site. Thanks!
at May 11, 2009 No comments:

If you're a long-time reader of this blog, you know that I have a strange Pac-Man fixation (check out my posts under the label Pac-Man). So what I treat it was to come across this hysterical clip. An infamous prankster in France named Remi Gaillard and his cronies filmed themselves dressed as Pac-Man and ghosts chasing each other through public places such as a supermarket, golf course, and pool hall. They make quite a spectacle of themselves in front of innocent passers-by (some not too pleased about it, as you'll see). Take a look!

Here is a bonus clip of an old commercial from the 80s for Arby's restaurants, promoting their Pac-Man tumbler set (unfortunately, the commercial is cut off at the end).

Speaking of Batman (see my previous post), last Friday, May 1st marked the 70th anniversary of his first appearance! It was on May 1, 1939, that Detective Comics #27 debuted the Caped Crusader (most people call him the Dark Knight these days, but he'll always be the Caped Crusader to me). In honor of this, here is a short cartoon from the late 1960s Filmation-produced series, titled "The Joke's on Robin." Enjoy!

Batman has fallen on hard times! See just how hard in his clip courtesy of Funny or Die.com.

Today's finding comes courtesy of a poster on the message board of the comic book podcast Comic Geek Speak. I can't believe I didn't hear of this until this week.

In 1967, the Batman TV show was at the height of its popularity, and show producer William Dozier got attention from the networks. Dozier's success with Batman led to a green light (so to speak) of a TV adaptation of the classic radio program The Green Hornet, unfortunately only lasting one season. Dozier also tried his hand at another DC Comics's superhero, or in this case, heroine. He quickly put together a five-minute mini-pilot based on Wonder Woman. Like Batman, Dozier envisioned a comedic take on the character.

The lead portraying WW's secret identity Diana Prince was Ellie Wood Walker, who's only real claim to fame is being the wife of actor Robert Walker Jr. The one-scene pilot revolves around Diana worrying about boyfriend/airline pilot Steve Trevor on a stormy night and wanting to rush to his aid as Wonder Woman. All the while, her overbearing mother nags her to stay home, give up being a superhero, and marry a man. Diana wins out and reverts to her hero persona--in a BAD costume! Take a look.

It's really bad. Not just the costume, everything! It's no wonder no network picked it up.

Now THAT'S how you do a Wonder Woman show!

BTW, Saturday May 2nd is Free Comic Book Day! You can find a participating comic book store near you here: