My final post of the 2007 holiday season; my final post of all of 2007, for that matter. I started this blog back on October 30th, and I've had an absolute blast sharing all of this great material with you. Since the blog's inception, almost every post has been related to a holiday, be it Halloween, Thanksgiving, or Christmas (or other). With the start of a new year upon us, I will be branching out of that small niche to bring you all kinds of great things on all kinds of subjects. Thanks to everyone that has given my blog a look the past two months, and I hope you continue to stop by throughout 2008 and beyond.

To ring out the old and ring in the new, here is one final Christmas clip, a unique take on "The 12 Days of Christmas" (sent in by friend Todd Mason):

Finally, count down to midnight amongst the company of Rhoda Morgenstern:

To everyone, I wish a year of health, happiness, and love.

This is about a subject near and dear to my heart. Every New Year's Day, many Philadelphia citizens participate in and enjoy as spectators the Mummers Parade, something most people living outside the area aren't familiar with.

The Mummers Parade is one of the oldest continuing folk traditions in the country. The Parade consists of people dressed in various kinds of multicolored and speckled costumes, very similar to Mardi Gras in New Orleans. There are four different divisions of Mummers: comics, fancies, string bands, and fancy brigades.

The comics are simply that: clown-like in nature, and usually spoofing some type of social or pop cultural trend. Fancies are individuals arrayed in extravagant costumes of different categories, usually with a theme to their outfit. String bands are large groups of musicians (between 46 and 64 members) who march in ornate comstumes while playing their respective instruments: saxophone, banjo, bass fiddle, and drums, creating a unique sound not heard anywhere else on the planet. Finally, the fancy brigades perform similarly to the string bands, but to popular recorded music of the times rather than their own live music.

I was a Mummer myself for several years, and I was and currently am very proud to have been a part of it.

What I've said here doesn't do justice to the tradition. The best thing I can do is offer some clips.

The band seen directly above, The Joseph A. Ferko String Band, is one of the most popular bands of all time. Here is the band's titular founder on the game show "I've Got A Secret" from 1963:

For more information on the Mummers, visit these online sources:

Finally, this longtime Mummer sums up why this great tradition continues:

Email ThisBlogThis!Share to TwitterShare to FacebookShare to Pinterest
Labels: Best of Me and You, holidays, music, New Year's Day, Philadelphia, TV

I hope everyone had a great Christmas Day! The day after Christmas often feels like a downer compared to the big day beforehand, at least for me, but I perk up again as the week inches closer to New Year's Day. Until then, even though Christmas Day has passed, it's still the holiday season! Keep playing the Christmas music, keep watching Rudolph and Frosty on TV, and keep wearing handmade sweaters with gaudy Santas on them! Have at it!

And to prove it's still the holidays, below is a primer for a holiday that begins today--Kwanzaa.

Well, this is it: my last Christmas post. But not my last holiday post, and you'll see the difference throughout the upcoming week.

First, Ed Grimley, aka Martin Short, stars as "The Fella Who Couldn't Wait for Christmas."

Next, a delightul look at "Christmas 1950" around the world:

Finally, the reason for the season, courtesy of one of my all-time favorite voices of moral conscience:

And on that note, I wish everyone, Christian or not, all the blessings of Christmas, today, tomorrow, and through all the days of your life.

Here are two very infamous outings starring Santa as hero. The first is Santa Claus Conquers The Martians, featuring Santa kidnapped by the titular beings, and the second is the conveniently named Santa Claus, featuring Santa versus none other than Satan. I couldn't find a pure version of the latter film; the only version I could find online is the Mystery Science Theater 3000 edition. Perhaps that will add to the experience of watching that dreadful film.

Martians at least has some quaint charms. I like the idea of Santa conquering not with weapons, but with love. I think a remake would do the concept justice.

I've kept this blog family-friendly from the beginning, but this post is an exception. Here I present the very first South Park cartoon ever--even before the famous Jesus vs. Santa version of "The Spirit of Christmas" (which can be found all over the Internet). This version is maybe less well known. It features Cartman being called Kenny and the world's most malicious snowman (aside from the non-Michael Keaton version of Jack Frost). Don't put the hat on the snowman! VIEWER DISCRETION ADVISED!

Also for your enjoyment, a modern Christmas carol from Robert Smigel and his "TV Funhouse."

This is an Oscar-winning animated short about a boy's trip to the North Pole courtesy of a magical snowman. A beautiful film with a bittersweet ending. The narration at the very beginning is read by David Bowie. I'll have more from Raymond Briggs after the holidays. 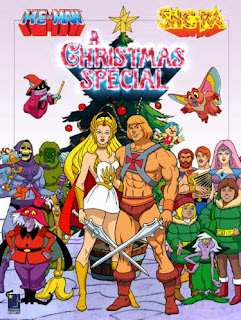 Here is an item that I'm especially psyched to present. Not because it's a particularly great special in itself (I haven't seen it in years), but because it's a part of one of my favorite TV programs growing up: He-Man and the Masters of the Universe!

Like most Generation X males, I clamored for every item of this awesome Mattel Toys franchise. The TV show was required viewing for everyone I knew. The line was so popular Mattel created a female spin-off: She-Ra, He-Man's twin sister (it's a long story). After she earned her own program, characters from both shows united for this Christmas special (which may only have aired for one Christmas season). Here it is in five parts, so kick off your shoes, sit back, and enjoy the ride!

Email ThisBlogThis!Share to TwitterShare to FacebookShare to Pinterest
Labels: Best of Me and You, cartoons, holidays, TV

This is an animated special created by the prolific Nelvana studios of Canada circa 1980. It's probably been that long since I last saw it. I thought this was very strange and trippy then, and my opinion hasn't changed now. Certainly not a classic, but a worthy trip down Memory Lane nonetheless.

Here we have two cartoons featuring the most famous Christmas characters around (not counting Santa and Jesus Christ, of course). These cartoons precede the famous Rankin/Bass creations by, well, quite a few years. The Rudolph cartoon was created by the renowned Fleischer Studios (animators of Popeye and Superman); I don't know the origin of the Frosty cartoon. They rock!

Alright, Christmas fans, now it's time to get serious! I'm bringing out the big guns, starting with this cult classic.

In fact, I'm probably the only creator and peruser of blogs like this that HASN'T seen this special. Even as I post it, I haven't seen it, but I hope to now that I've blogged it (courtesy of the fine folks at Google Video). It's two solid hours (!) of Star Wars "holiday" fun. I hope it's as kitschy as I expect it to be, but I also hope it's more entertaining than the God-awful Star Wars Christmas record by Meco. I just heard it for the first time this week--OMG!

Today I'd like to clear out the last of the Christmas commercials I've stockpiled so I can move on to more full-length Christmas programming. Time's a wastin'!

The most famous Coke commerical (aside from the one starring Mean Joe Green) is probably the one from circa 1970 featuring a multicultural cast singing the jingle "I'd Like To Teach the World to Sing." The one I grew up with, however, was this holiday version from several years later.

Speaking of soft drinks, remember the 7-Up dots? I loved them, and they shine in this fun clip.

Everybody loves Oreo cookies, and Santa is no different!

The late Michael Landon made a series of Kodak commercials in the early '80s. Here is a holiday-themed example.

Does anything embody Christmas better than Fruity Pebbles cereal? Yeah, many things do. But this commercial is as sweet as the cereal.

The person who uploaded this classic clip on YouTube says this is the best McDonald's commerical ever, and it's hard to argue. I dare you not to be moved!

This Herskey's Kiss commercial is still on the air today, and God bless'em for it. One of my absolute favorites!

Finally, this is an old bumper from CBS that I didn't know existed until yesterday, but I already adore it. A rare moment of tranquility on a major US network. Excellently done!

To usher in the Festival of Lights, beginning at sundown tonight, I have two celebratory clips. The first is a brief description of the holiday's origins.

Second, an energetic rendition of "Light One Candle" by Peter, Paul, and Mary.

M&Ms Christmas Commercials from the 80s

This post is a tribute of sorts to film editing. Here we have two different commercials for M&Ms candies--and yet they're not so different. Each commercial features the same film footage but different jingles. Two commercials for (almost) the price of one. Enjoy the recycled Christmas goodness!