Although the Labor Day weekend is still a few days before us, the summer is already effectively over for many. My wife, a kindergarten teacher, begins her first day of the year tomorrow. Our 6-year-old daughter begins first grade on Wednesday. Many college students (you perhaps?) start this week, if they haven't started already. Although the calendar says otherwise, fall is here. To begrudgingly acknowledge this fact, here is the blog's kickoff to fall, courtesy of Mad TV.

Mad TV was the Fox network's answer to Saturday Night Live until this past spring, when it was canceled. One of its long-running skits was a series of animated spoofs of one of my alltime favorite TV shows, Schoolhouse Rock. Although they are funny, they also carry a sad message on the state of urban public schools in America. Here are Mad TV's twisted versions of Rock classics. Enjoy!

Email ThisBlogThis!Share to TwitterShare to FacebookShare to Pinterest
Labels: back to school, cartoons, humor, parody, TV

Just yesterday I finished the 1961 children's book The Phantom Tollbooth by author Norton Juster and illustrated by Jules Feiffer. It's a great story about a boy named Milo who finds a magic tollbooth that takes him on a fantastic journey through the lands of words and numbers in search of two princesses who can restore the scism between the two lands. It features clever plays on words and strange characters, similar in vein to Alice's Adventures in Wonderland.

I was inspired to finally read this children's book (at the age of 34) because of my rememberance of a film version released in 1969, which I saw on TV back in the early 80s (possibly on my beloved channel WKBS Channel 48 in Philadelphia). Unfortunately, the film was only available on VHS once and has never been released on DVD. The last I saw any TV appearance was on cable channel Turner Classic Movies (after it finished airing, much to my dismay).

However, through the magic of YouTube, I can feature it here! As tough as some may find it to watch a full movie off of YouTube, please do yourself a favor, regardless of your age, and enjoy this delightful film version, a combination of live action and animation (the latter of which is directed by the legendary Chuck Jones). Thanks!

As an added bonus, here is another Chuck Jones project based on a book by Juster, a short cartoon called "The Dot and the Line". I've always loved this cartoon, but I had no idea it was based on a book by the same author as Tollbooth until today!

Summer Refreshment for a Hot Day

Hello everyone! I'm reallly sorry that I haven't posted in almost two weeks. It's been crazy busy since then, and will likely continue to be the rest of the summer and into September, but I'll do my best to keep blogging. Please keep checking in if I stall again; it won't be long before I post something new.

Today is hot here in the northeastern US. Damn hot. The kind of day you need something to refresh you and keep you cool. Here are some cyber-based refreshments to cool down your 'puter!

For the kiddies out there, there's Kool-Aid!

Have a second cup! This clip gets bonus points for having a quick bumber for early 80s CBS Saturday morning TV.

In a similar vein, there's always Hawaiian Punch! Although Punchie isn't as friendly as Kool-Aid Man.

Finally, even on a hot day like this, it's nice to have some decent food. What food fits summertime better than an American classic, the hot dog? Of course, you don't just want any hot dog; you want one that's devine. Regardless of your faith, try Hebrew National.

I hope that quenched your thirst, among other appetites. Until next time, keep cool, be safe, and have a happy summer!
at August 17, 2009 No comments:

I saw this awhile back on the great Comic By Comic site several months back, and you'll enjoy it as much as I did. Here is audio of British comedian Eddie Izzard performing as Darth Vader ordering food from the Death Star cafeteria, set to animation with Legos. It makes more sense when you actually see it. Enjoy!

It's been far too long since I posted for this feature, and it's high time I did. Once again I'm visiting an old comic book ad for a TV network's Saturday morning lineup of the past and doing the best I can to recreate the experience here (well, recreate the lineup, if not the experience). For this round, I present the Saturday morning lineup for ABC in the fall of 1980! You can check out my two previous installments of this feature here and here. 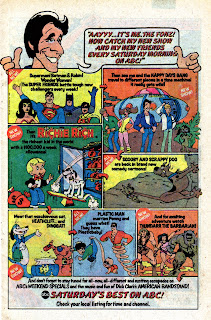 First up at 8am Eastern time is a true Saturday Morning classic, Superfriends. Here they appear in "The Beasts Are Coming!"


Next at 9am is The Fonz and the Happy Days Gang, an animated version of Happy Days. Yes, Happy Days. Except this incarnation involves time travel. And a humorous dog who gives thumbs up. ABC took this approach with a few of their live action sitcoms, but this started the trend. Just look.

At 9:30, ABC presented the Scooby and Scrappy Doo Show. Here, the canine duo (along with human Shaggy) wind up on a boat as "Stow Aways."


10am began the Richie Rich Show. I couldn't find any episodes, but here are the intro, outro, and interstitial bumpers.

10:30 brought us the comic strip cat Heathcliff, along with co-feature Dingbat, the vampire dog. Yes, networks tried everything on Saturday morning TV.


At 11am, we saw DC Comics superhero Plastic Man, a carryover from the previous season, but this time with a bouncing baby boy--literally.

This was followed at 11:30 by Thundarr The Barbarian. Character design was created by legendary comic book artist Jack Kirby.

Lastly, the morning (by this time, afternoon) ended with two ABC stalwarts, The ABC Weekend Special and American Bandstand. I've featured the Special before, and there are virtually no clips for Bandstand, so I'll stop here.

Quite a mixed bag here. Superfriends was a winner, and I was a fan of Thundarr, but Happy Days is laughable and the remaining lineup forgettable. I'll look for the other networks for this same time period to see how they compare.

I once again want to thank Kliph Nesteroff of the Saturday Morning Blog and Shawn of Branded In The 80s for permission to use the concept and comic book ad, respectively. Please send me any feedback you can so I can make this feature prime reading. Thanks!
at August 02, 2009 No comments: