January's Underappreciated Music: The Monkees Featuring Neil Young, "You and I" 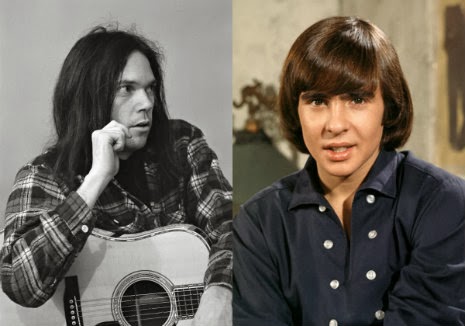 Great minds think alike. Recently, my good friends Todd Mason and Peter Carley both separately sent a link to me from the Web site Dangerous Minds describing the little known times that Neil Young contributed to recordings of the Monkees (an article you can read here). The full song that the article uses as an example of this pairing was the song "You and I," written by Davy Jones and Bill Chadwick, with vocals by Jones, from the band's album Instant Replay (the first album released after Peter Tork departed from the band).

The song is a more mature and harder-sounding song that is usual for Jones, which is to the singer's benefit. The teen idol trappings of the majority of his earlier songs with the band are absent here, and the song really lets Jones' vocal talent shine, as well as his growing sophistication as a songwriter. Young basically does his thing on guitar, and the pairing of him with the band is a fine one (and this is coming from someone who is not a particular fan of Young).

Here is the song in all its glory. Enjoy! 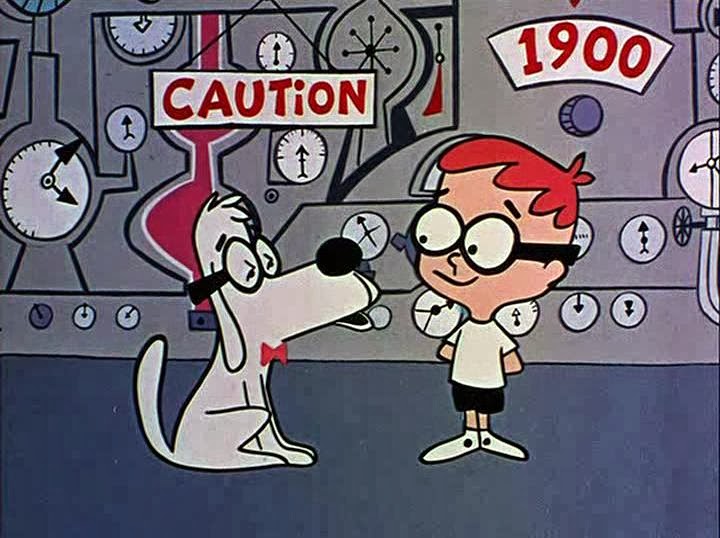 Commercials for the upcoming Mr. Peabody & Sherman movie are all over children's television lately, and my kids are interested in seeing it. For their benefit as well as yours, I'm featuring here today the first-ever Mr. Peabody cartoon produced by Jay Ward back in the 60s. It quickly tells Peabody's backstory as well as how he met and adopted Sherman.

As a bonus, this clip also includes one of Ward's "Fractured Fairy Tales," this time telling the tale of Rapunzel. 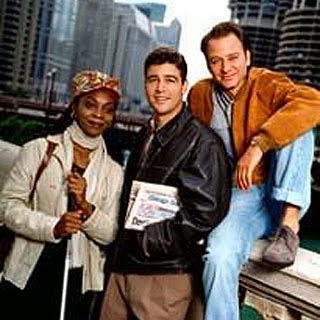 Early Edition starred Kyle Chandler (Friday Night Lights) as Gary Hobson, a stock broker in Chicago who, after his wife suddenly leaves him, begins receiving the next day's edition of the Chicago Sun-Times by a tabby cat. Yep. Although his friend Chuck tries to encourage him to use the advance knowledge of future events for monetary purposes, Gary instead tries to stop bad things reported in the paper from happening, sometimes with the assistance of a Chicago police detective, who doesn't understand how Gary gets his information.

The series ran for four seasons on CBS (1996-2000). The first two seasons were released on DVD, and reruns have appeared on The Family Channel and Hallmark Channel.

You can check out the pilot episode below. Thanks!

I have to thank my good friend Peter Carley for bringing these two cartoons to my attention. He had posted last week the news about an upcoming movie based on the Hot Wheels toy franchise manufactured by Mattel. I commented that I thought it was a major stretch to base a movie on something like Hot Wheels. Peter in turn pointed me to a precedent to basing a media product on Hot Wheels.

Hot Wheels, featuring the racing exploits of high school student (really?) Jack "Rabbit" Wheeler, aired for two seasons on ABC Saturday mornings starting in the fall of 1969. Two of the voice actors featured on the series were Casey Kasem and, of all people, Albert Brooks! (Un?)fortunately, the cartoon has never aired since, nor has it ever been released on home video.

But that's not the only gem I discovered from this conversation.

A buddy of Peter raised the stakes of bad cartoons by posting this glorious discovery:

Yes, that was Super President, the cartoon about the President of the United States having super powers. Powers that, apparently, were anything the writers wanted them to be if they moved the story along. At least it had awesome voice work by Paul Frees. The series aired on NBC from September 1967 through December 1968. The series was canceled due to criticism that portraying the US President, even a fictional one, as a superhero sent a bad message to the rest of the world. The series was produced by Depatie-Freleng animation studios, which produced the Pink Panther cartoons among many others; the studio would be acquired by Marvel Comics circa 1980 and become Marvel Animation Studios.

Just when I think I've learned about every TV cartoon series that existed, fun stuff like this comes along out of the blue and amuses me to no end. Great stuff!
at January 26, 2014 8 comments: 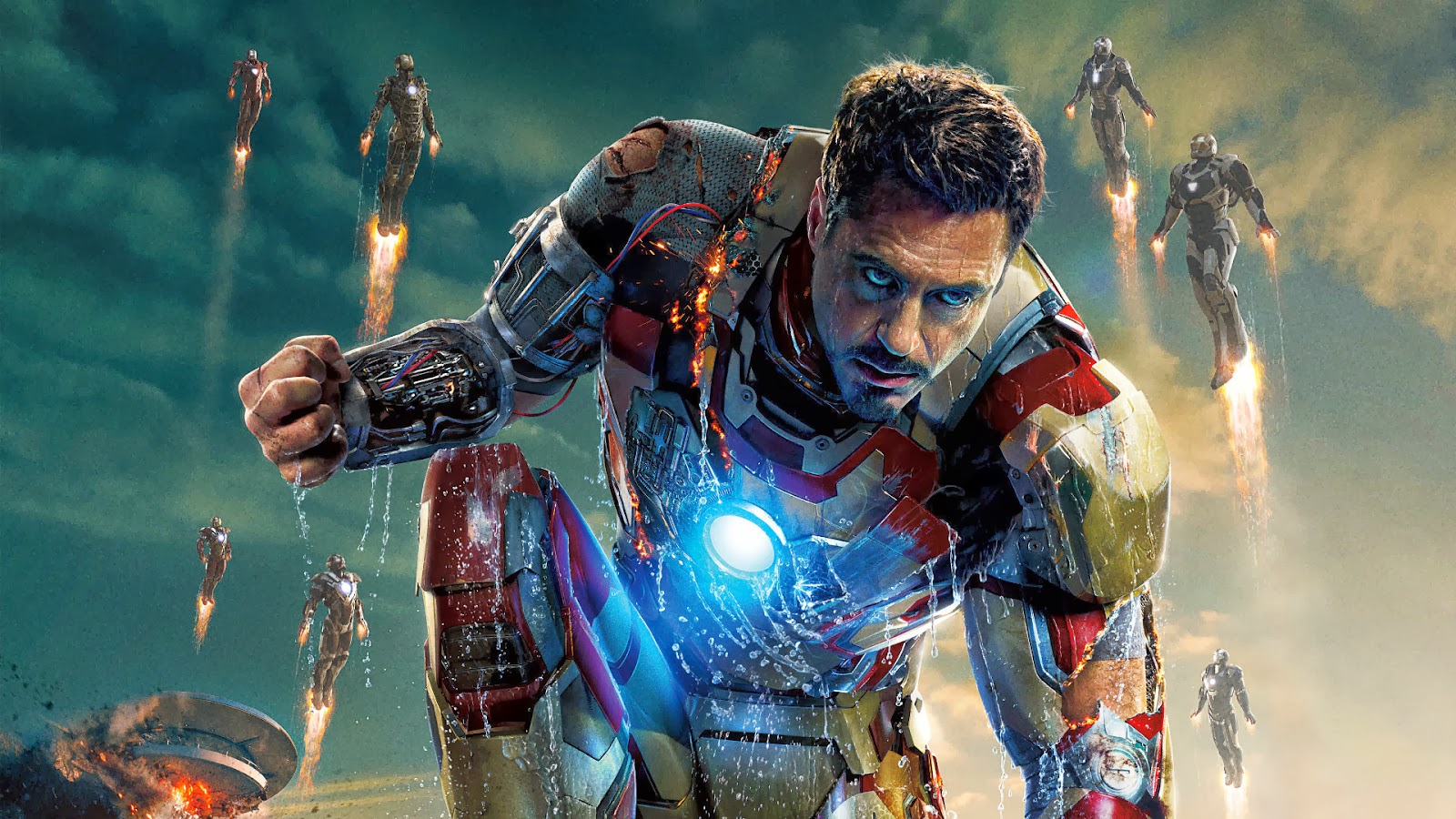 I've been wracking my brain for a topic for this week's Tuesday's Overlooked, so since I just finished seeing it on DVD last night, this week I discuss one of last year's box office hits, Iron Man 3. Not exactly overlooked, of course, but I can say I enjoyed it quite a bit.

After the events of 2012's Avengers film, Tony Stark (Robert Downey Jr) begins having panic attacks whenever someone mentions the alien invasion of the previous film. His fragile mental state leaves him in a bad position to be menaced by an elusive international terrorist known as the Mandarin (Ben Kingsley), with help from a fellow wealthy industrialist with a grudge against Stark (Guy Pierce). His spirit (and tech) broken and love Pepper Potts (Gwenyth Paltrow) in serious trouble, Tony must scrape together his last bits of sanity and technology to fight the double threat.

I've loved all of the Marvel Cinematic Universe films with the exception of Iron Man 2; this film makes up for that misstep. The characters are as engaging as ever, the dialogue witty, and the plot twists intriguing (if somewhat controversial among Iron Man purists). The length of the film could have been a bit shorter, but all in all, I was pleasantly surprised by how much I enjoyed the movie. Marvel has done a great job overall in their self-produced live action (I'm also a fan of the Agents of S.H.I.E.L.D TV series), and I'm as eager as ever to see future entries in this universe. 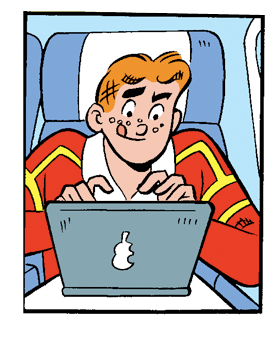 Hello one and all! I am very happy to join with you again, and I'm especially happy to greet a three day weekend! Even though the holidays aren't that far behind us, there's been so much going on I could use the extra break, and I'm not the only one I know who feels this way. Besides, I still have to take down my Christmas tree and stockings.

With all this extra time on our hands, let's spend some of it with this week's links. Be forewarned--they are all comic book related.

First, the big news--the Batman TV show from the 60s is finally coming out on DVD and Blu-Ray. Rejoice! A firm date hasn't been announced, but even to get this confirmation is enough to make me happy.

Speaking of Batman '66, here is why several comic creators love the series.

The Marvel Comics character 3-D Man is fairly obscure, but a character I've enjoyed since I first encountered him in Incredible Hulk #251. Here he is in his very first adventure!

Getting back to DC for a second, check out a clip from an upcoming Supergirl fan film, Girl of Steel!

Finally, Stan Lee is simultaneously the most beloved and hated man in comics. Chris Sims weighs the good and bad of both arguments and makes his own conclusions here.

Have a great long weekend! If you are performing community service on Monday, thank you very much! 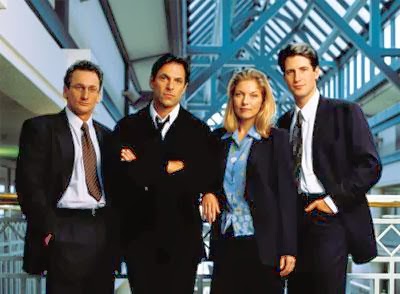 It's been gone here for awhile, but Tuesday's Overlooked returns for its first appearance in 2014! This week, I take a look at the CBS medical drama L.A. Doctors.

The show's generic title just about says it all. It revolves around four doctors in downtown Los Angeles and the challenges they face running their practice in the face of patients with difficult conditions and societal conditions such as inadequate insurance coverage, urban decay, etc. They also face their own personal problems, both with each other and outside the practice. The main cast features thirtysomething alum Ken Olin and Twin Peaks' Laura Palmer, Sheryl Lee.

The show didn't exactly break new ground, but I found it interesting enough to watch its entire first and only season (1998-1999). The series aired on CBS Monday nights at 10pm, with tough competition from Monday Night Football.

The series has never been available on video as far as I can tell, and footage on the 'Net is sparse, but here are a couple of quick promos for the series. Thanks!

Hello gang! I hope everyone had a wonderful holiday season, and I wish you all a happy and safe new year. Today was my first day back at work since the morning of Christmas Eve, and with a snow storm hitting the area tonight as I write this, it's a bit of a rough adjustment getting back into the swing of things. Of course, it's always an adjustment getting back into a normal routine after the holidays.

You spend six weeks in this holiday zone, where everything you do is based around it, things come to a head on Christmas Day (if that's your main holiday, of course), you get a last shot of holiday cheer with New Year's Day, then on January 2nd, it seems as if you're forced back into reality as if the holidays never happened. It's always a weird feeling.

While I haven't made official new year's resolutions, I do want to get back into a regular blogging schedule. If I can write three blog posts a week, I'll be happy. More would be even better, and if you have suggestions for how the blog can be improved, please feel free to leave a comment, email me at phillyradiogeek@gmail.com, or take the survey along the right of the blog.