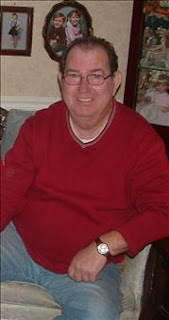 I couldn't have asked for a better father.  From him I learned how to be strong, how to be funny, how to believe in myself, and most importantly, how to love.  No father can do more for a son than that.  I never doubted for one second that I was loved by him.  I knew I would never be alone and always had someone on my side because of him.  From the amazing love he and my mother shared, sprang a family I am honored to be a part of.

It is from him that I learned how to be a loving husband and father.  I know I haven't measured up, but to my beautiful wife Joanne and our adorable children Megan and Brian, thank you for the opportunity to try.

To all the family and friends that have rallied around us at this difficult time, thank you very much.  Your love and support won't be forgotten.

Finally, to my father himself, thank you for absolutely everything.

I love Star Wars almost as much as anybody, but you know what the first film needed--more comedy! This would have done the trick. Thanks to Rich Lovatt for Tweeting this earlier this week.

If you live in Corydon, Indiana, turn to Butt Drugs for all your pharmacy needs. Learn more below!

The Avatar role players wish to connect with humans in the spirit of peace and harmony.  What better way to do that than through the latest Internet sensation Chat Roulette?  Be warned, this is NSFW at times!

I haven't seen Avatar, but even if I see it and love it, I don't think I'd be this inspired by it.  In case you're wondering, this is a comedy film and not to be taken seriously.  Enjoy!

In the spirit of my Peanuts as Pitchmen series, and riding the wave of 80s nostalgia this week, I present another pop culture icon as product shill, and another favorite here at the blog--Pac-Man.

Here is a commercial for 7-Up from 1982 that features both Pac-Man and a jingle-ized version of "Bette Davis Eyes."  You can't get more 80s than that.

Finally, here is a commercial that is labeled as for Pepsi on YouTube but is in fact for some kind of online gaming platform or something.  Being a Spanish language commercial makes it diffuclt for me to tell.  It features an interesting way to present Pac-Man, however.

By request!  Here is a quick word about two locally produced children's series that aired in the 70s and 80s on WCAU-TV, Channel 10 here in Philadelphia.

The first is The Candy Apple News Company, in which a small human cast interacted with puppets in putting out a newspaper.  The main cast member was the late Matt Robinson, who had previously played Gordon on Sesame Street and was the father of actress Holly Robinson Peete.  Each episode was a fun half hour of skits, short educational films, and other produced pieces.

Alas, there's very little information about the show on the Internet, and virtually no footage.  I've tried for years, but have only found this one clip of the show's intro, which was just uploaded to YouTube last month.

This was requested by freelance writer and fellow blogger Chris Illuminati, whose exploits you can read about at the Great Moments in Christory blog, among other fine places, including his new book which you can purchase here.

Around this same time, Channel 10 also produced Star Stuff.  This show revolved around a boy in Philadelphia who could communicate with a girl who lived in a space colony in the future via his amateur audio and video equipment.  He would play various video clips, cartoons, and for some reason, Laurel and Hardy silent films (I'm not making that up).  I liked the show for that reason alone.

Clips of this show are also rare, but here is the opening and closing sequences, along with a brief profile of the show for the Web site io9.

Yes, Happy St. Patrick's Day from your Irish author here. I have a fine holiday treat today, but first, a word of thanks.

I am amazed--AMAZED--at the response the blog has gotten the last two days. My post on Dancin' On Air has received over 600 views in less than 48 hours--my most read post ever! Thanks go out especially to Philebrity.com and Down the Shore with Jen for spreading the word about the videos and bringing in so many people to my site. I hope you new readers stick around.

For more articles related to Philly TV, please check out the following:

My tribute to WKBS-TV Channel 48 (may it rest in peace),

my article on the children's program The Most Important Person,

and from the same creators, The Kingdom of Could Be You.

As for the day at hand, celebrate St. Patrick's Day by catching a leprechaun. If that proves troublesome, enjoy the day with these animated leprechauns instead. Erin Go Brah! And once again, thanks for reading.

UPDATE AS OF MARCH 23, 2010: A week after this entry was written, two of the videos below were pulled from YouTube due to a copyright claim by the owner, whose Web site appears at the end of the post.  As this post was so popular, however, I'm leaving it "as is" so people can still read about the show.  DVDs can be purchased at the aforementioned Web site.  Thanks!

Back in the 80s (yes, I'm dipping into the 80s well again), there was a dance show that aired on local TV in Philadelphia called Dancin' On Air.  This was an old school teen dance show that aired Monday through Friday on WPHL Channel 17, very similar in format to Bandstand back in the 50s.  The series ran throughout the decade and slighty into the 90s, evolving into a weekly national show that aired on USA network on Saturdays, renamed Dance Party USA.  The show was a must-see for teens throughout the Philadelphia area in the show's prime.  The great thing about this series was its role as a time capsule for the decade in both fashion and dance music.  Witness!

Here, local band Social Voyeurs (I don't remember them) perform on the show.

Finally, the program was a showcase for one young woman from Berlin, New Jersey who would go on to much greater success in acting and program hosting--Kelly Ripa!  Talk about humble beginnings.

Lo and behold, there's even a tribute Web site to the show, where you can order DVDs of highlights from both series.  Sweet!  http://www.dancinonair.com/

Email ThisBlogThis!Share to TwitterShare to FacebookShare to Pinterest
Labels: 80s, Best of Me and You, Philadelphia, TV

Before They Were LOST

Rounding out my unofficial Lost Week, I present a few clips of Lost stars before the show existed.

Josh Holloway, a former model, appeared in some interesting places. First, here is the music video for Aerosmith's "Cryin'". Look for Josh at the 3:25 mark as a purse snatcher in a diner. Hey Sawyer, let go of Alicia Silverstone's handbag!

Next, here's Josh in a blink-and-you-miss-him moment in an Old Navy commercial.

Finally, here he is in a bit part on an episode of CSI as a valet.

Next is possibly the fan favorite of the entire series, the amazing Terry O'Quinn. He has a long and steady career as a character actor, and is more diverse than you might imagine. Here is one brutal scene from the 1980s thriller The Stepfather, in which he plays a psychotic killer.

Here is a much more different side of O'Quinn from the 1989 movie discussion series The Big Picture, on which he was promoting The Stepfather II. I had no idea he played guitar and sang blues! And he's really good, too!

Here he is in the 1990 film The Rocketeer (which you should see because its awesome) playing, of all people, Howard Hughes.

Lastly for O'Quinn, here he is on his previous "genre" TV show, Millenium.

Finally, here is a fun 10-minute film parody of The Fast and The Furious, titled The Slow and the Cautious, starring none other than Jorge Garcia, Lost's Hugo "Hurley" Reyes.


The Slow and the Cautious | Movies & TV | SPIKE.com

I hope you enjoyed this week's Lost goodies. I'll get back to a greater variety of stuff next week. Thanks!
at March 12, 2010 5 comments:

Since this has turned into an unofficial Lost Week here at the blog, I'll keep it going. Today I want to bring your attention to a cool band called Sonic Weapon Fence, which performs songs in tribute to Lost. Their first EP The Oceanic Six is available for free download at their site here. I downloaded it last year and it's been on my mp3 player ever since. They now also have a second collection of songs available for purchase at iTunes and CD Baby. Their songs are clever, fun, and tongue-in-cheek. Check them out; you'll be glad you did!
at March 11, 2010 2 comments:

Lost would have been a totally different show if this had been DHARMA's orientation film!

Continuing the Lost theme established yesterday, enjoy what would happen if Lost were more like Baywatch. Excellently done!

If you're a big Lost fan like myself, you'll get a kick out of this clip. This is from a film made in 1992 used to train prison workers. When one prisoner becomes unruly, it's up to the prisoner's counselor to talk him down--Michael Emerson, aka "Ben Linus!" Take a look!

Ask me anything http://formspring.me/phillyradiogeek
at March 05, 2010 No comments:

I'm a huge soda drinker. We're talking addiction level, which may explain why I'm 60 pounds overweight. Pepsi is my main drug of choice, but I'm certainly not averse to Coke. One soda that I used to drink quite often as a kid was 7-Up, the "Uncola." It used to be a high profile soft drink, but seems to have faded from pop culture consciousness these days. Maybe a return to catchy TV advertising would change that around. Advertising like what you'll find below.

Throughout the 70s and early 80s, 7-Up commercials featured actor Geoffrey Holder espousing the pleasures of drinking the product, noting it's refreshing, crisp taste as opposed to the supposed sludge of cola drinks. These commercials were all over TV back in the day and were both enjoyable and effective. See for yourself, and perhaps you'll wish you had a 7-up handy!

It's been awhile since I've featured a Pac-Man related post, so here's something I just came across last week. Similar in vein to the animation by artist PES I featured long ago, here is the short film "Chomp Chomp." Enjoy!