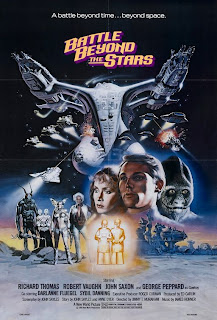 After my regrettable absence from the feature last week, I'm back with Tuesday's Forgotten Film.  This week, it's the Roger Corman produced Star Wars ripoff Battle Beyond The Stars.

I confess that I haven't seen the film, but you can deduce what the film is like easily enough from the trailer below.  Richard Thomas (The Waltons) plays a Luke Skywalker-esque character out to save the galaxy from the tyrannical villain played by character actor extraordinnaire John Saxon.  Throw in wisecracking pilot George Peppard (clearly a warm-up for his character of Hannibal on The A-Team) and you've got yourself a movie.

It's obviously a cash-in on the astronomical success of Star Wars--the title alone is a giveaway of that--but Battle has one thing the first Star Wars film doesn't--100% more mammography. 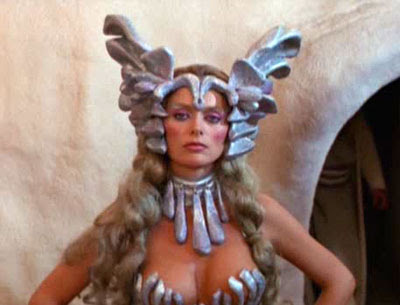 The Corman touch, that last...whether it's good touch or bad touch I leave to others, but anything to upgrade the STAR WARS formula is welcome. (I've never sat through BATTLE, either.)

I actually saw this in the theater and remember liking it quite a bit. (Granted, I was 11 and all about anything sci-fi thanks to Star Wars.)

I've been sitting on a downloaded copy of it I got off the interweb weeks ago, and have been planning to re-watch and review it. The fact that you're the third blogger I've read in the past week to mention it is maybe a sign I should do exactly that...

Todd: I believe judgment on good touch/bad touch is up to the district attorney's office. Don't ask me how I know...

I could have used an even racier picture to demonstrate my point, but thought better of it.

FilmFather: I'd love to see this and many other cheesy films, but my time and resources are very limited. I envy your copy.

I've been watching Star Wars this week and thought of this film; the other bloggers may have done the same. Weird, wild stuff.

I also saw this at the theater when it came out. I liked it then but I haven't seen it since. I do have the View-Masters though.

Erick: if the View-Master has a shot of the chick in the costume, you were a lucky kid!

This is actually a (loose) remake of THE SEVEN SAMURAI. It's a pretty classy little movie by Corman standards and the special effects shots were reused many times in his later SF films such and GALAXY OF TERROR and FORBIDDEN WORLD.

Chuck: I had read about the link to SAMURAI and wanted to mention it, so thanks for bringing it up here. I'm surprised at the admiration for this movie--I'll have to check it out.

Hi Phillyradiogeek, Nice blog! How to add the Glitter Effect Mouse Pointer to your Blog

It's finally coming this July: Battle Beyond the Stars 30th Anniversary Edition DVD and Blu-Ray!

Shout Factory's even throwing in a free iron-on decal!

Not to mention that Robert Vaughan literally reprises his role from The Magnificent Seven, itself a remake of Seven Samurai.