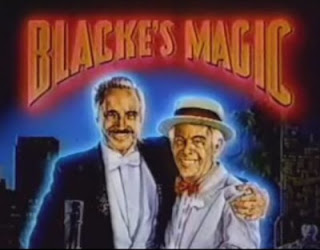 In this series, Hal Linden plays Alexander Blacke, a retired stage magician who helps the police solve crimes along with his con man father, played by the late Harry Morgan. That's pretty much all you need to know.

Talk about forgotten. I barely remember this series at all, but was made aware of it by an article I read about a previous attempt at a magician as detective series, The Magician, which starred Bill Bixby. You can read that article here at the wonderful site TV Party.

Here is the first episode of the series, "Breathing Room." Enjoy!

I remember both, which were pleasant, but had the mutual basic problem of trying to tie every episode into sleight of hand gimmicks, which both gives one an easy incident hook and tends to circumscribe the stories.

Thanks Todd. It doesn't sound very practical to solve crimes with shell games and trick mirrors.

Thanks for the links (sic) - I'm a huge fan of Levinson and Link but have never managed to see any of the episodes of this short-lived show.