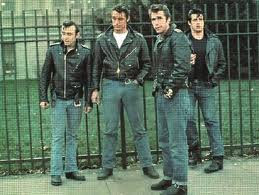 I haven't seen this one since losing interest in the tv edit ABC ran ca. 1977, more to cash in on Winkler than Stallone (at that point, I think, ROCKY hadn't quite come out). It's better than I vaguely remember?

I just started watching it after recording it off of This TV over the weekend. THE WANDERERS covers the same ground much more deftly, but I'm a sucker for this time period, so I'm sticking with it for now.

The Wanderers is based on a very unhappy, depressing book.