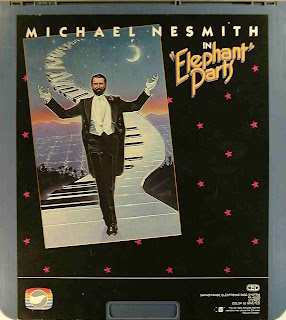 Hi everybody! If there's a bookshelf in the background of my blog, it means that Labor Day has passed and summer is unofficially over. For me, between the soggy, rainy weather, my daughter's broken arm in the month of July, and a lot of running around during August, summer was pretty much a bust for my household. But no use in complaining. The best thing to do is welcome autumn with open arms and appreciate its splendor. Cool weather, changing color of the leaves, and a certain countdown in the month of October ;)

Elephant Parts is a bit hard to describe, but it's basically an hour of weird comedy sketches, some a parody of Nesmith's previous post-Monkees projects, accompanied by five music videos of Nesmith songs (my favorite being "Rio"). While not exactly groundbreaking, it is amusing, and it definitely shows Nesmith's influence on the creation of visual-dependent media such as MTV. See for yourself below and enjoy the entire hour.

I hope you had a great summer; here's to a wonderful fall!

Was this on TV first? I think it might've been offered first on home video...making it arguably innovative, or nearly so, thus, as well...(and hope the young one's arm is much better).

You may be right about that, as Pacific Arts was indeed a video company (they released the Doonesbury animated special on home video).

The arm is better, but this past week she's had trouble with her foot. Dancer problems...

This was released on home video first, although some of the music videos (namely "Rio" and "Cruisin'") were created earlier, shown on TV earlier, and added to the hour-long video release. Elephant Parts won the first ever Grammy for a music video.

The confusion over being on TV probably stems from the fact that 2-3 years later Nes did a summer replacement series on NBC called "Television Parts," which was in much the same style.

Along with his own music, there were also video clips Nes made for other artists (Jimmy Buffett, for one) on the show. Nes' brand of comedy was a big part of the show too, and included a lot of famous (or soon-to-be famous people): Whoopi Godlberg, Martin Mull, Garry Shandling, Jay Leno, and Jerry Seinfeld.

Television Parts only ran for a about 6 episodes or so, but there was later a "Television Parts Home Companion" video release, and more from the show was later released under the odd name "Dr. Duck's Super Secret All-Purpose Sauce."

Sadly, finding any of this stuff is hard now (unless you want to pay ridiculous prices). Thankfully, there's some stuff on You Tube at least. I'd love to see a company like Shout! Factory re-issue all of this stuff, including the complete run of Television Parts.