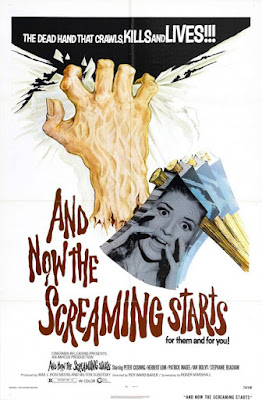 I'm afraid I didn't get to post an official installment of Tuesday's Overlooked Film last week, so I wasn't able to keep to my promise that I feature a crawling hand film every week like I wanted to. But this is a new week, so here I present to you the 1973 shocker And Now The Screaming Starts!

The story is set in England in 1795, and the main character is Catherine, an aristocratic young woman who visits the home of her fiance Charle to be married. While strolling through the premises, she takes interest in the portrait of Charle's grandfather Henry. Suddenly, a hand seemingly bursts through the portrait for Catherine. Things get far creepier and macabre from there.

Although not a Hammer Studios film, it's very much in that vein, even featuring Peter Cushing in a key role. If you like your horror British, gothic, and don't mind killer severed limbs, you may enjoy And Now The Screaming Starts.

In fact, you can enjoy the entire film right here and now! Thanks!

Thanks, Brian...I was pretty sure I'd seen this one as a kid, but now don't think I had, nor since...Amicus, around the turn of the '70s, was the #2 UK horror studio, and although they often botched Robert Bloch's scripts, at least his first anthology film with them, TOTURE GARDEN (they at Amicus weren't really good at titles, either), managed a decent final product.

THE TORTURE GARDEN having been a Decadent novel from the early 20th C that had nothing to do with the film, doncha know...