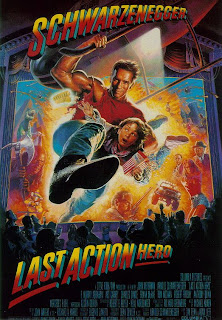 After taking the week off last week, I'm back with another film, this time the Arnold Schwartzenegger vehicle The Last Action Hero.

This movie was a big disappointment box office wise when it was released in 1993, partly due to poor reviews and also because it was released on the exact same day as the year's biggest hit--Jurassic Park.  I find this unfortunate, because I saw the film in the theaters that year and found it quite enjoyable.  Of course, I knew someone who worked at a theater at the time and got in for free, but I would have felt satisfied had I paid admission.

The film, about a preteen boy who receives a magical movie ticket that allows transportation between the movie world and the "real world," is quite the meta-film.  It constantly pokes fun at the ridiculousless of action film conventions, while at the same time falling back on them to move the story along, at least to a small extent.  The satire is playful rather than scathing, and lets the audience in on the fun.  The same can be said about Schwartzenegger in particular, as he does a fine job of lampooning his onscreen persona as he shows that he can laugh at himself and his body of work. 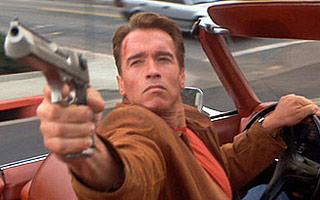 I'll admit that the film runs too long (it could have been shortened by a half hour and still have had plenty of story and action left), and you can tell that a large body of writers had their hands in the creative till, as the story moves from one wacky situation to another seemingly for no other reason than "just because,"  but those are not reasons to avoid the movie.  If you're willing to shut off your critical brain, relax, and enjoy the ride that is The Last Action Hero, I think you'll have a good time.

And what do you know?  Throught the courtesy of Sony's video site Crackle, you can watch the movie in the comfort of your own home for free.  Check it out here!
- March 01, 2011

I'm a big fan of Last Action Hero. It's not only full of action, it's darn funny at the same time.

Arnold is very funny in this movie, especially during the funeral scene for . . . I can't remember his name . . . I think it was Leo the Fart? Something like that.

His name was indeed Leo the Fart.
(He was a flatuent man...)
I liked when Schwarzenegger fell in to the La Brea tarpits and wiped the tar off like it was just mud. Great movie. I still have the Soundtrack on CD.

Batman Returns: Dark Side of the Knight Featurette

Here we are--my final post in tribute to the 30th anniversary of Batman Begins ! We'll start off with a short interview Tim Burton did... 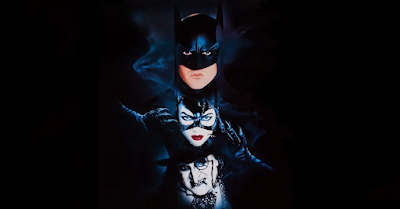