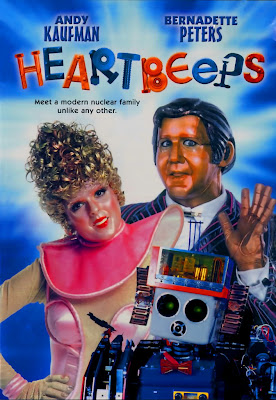 Tuesday's Forgotten Film this week is one that I've never seen, but have vivid memories of TV commercials for it when the film was released--the infamous 1981 comedy Heartbeeps.

Set in the then-future 1994, Andy Kaufman stars as robot Val Com, a butler robot who falls in love with hostess robot Aqua Com (Bernadette Peters). The two robot lovers run away from their human owners and are chased after by the AI-infused robot tank Crimebuster, which has no problem destroying everything in its path to find the android fugitives. 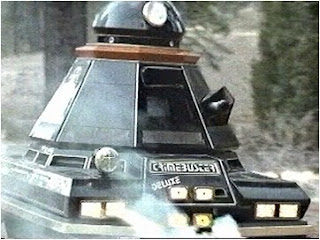 Along the way, Val and Aqua are joined by cutesy robot Phil and comedian robot Catskill, voiced by old school comic Jack Cater.

Oh, and Randy Quaid is in it too, for what it's worth.

The film, as one can imagine, did extremely poorly at the box office and with critics. Kaufman hated the movie so much that he apologized for the movie on an appearance on Late Night with David Letterman and promised to refund anyone's price of admission who didn't enjoy the film.

This movie seems so bad, so ridiculous, that I have to see it! It's currently available on Amazon Instant Video. It was once available on DVD, so if new copies can't be found, it's available on Ebay and the usual second hand outlets. A trailer for the film appears below.

I remember seeing this a few times on HBO in the early 80s. Not much I remember about it, really. I bet a rewatch would just make me wince.

Thanks Joe. This is one I have to see out of sheer curiosity.

I remember finding Crimebuster to be a little scary in the TV commercials when I was 7.