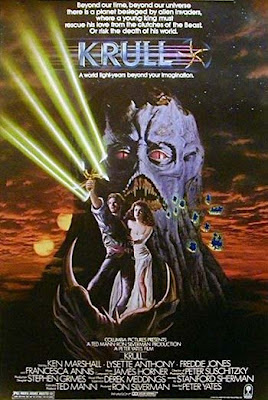 Hi everyone! Time is short, and so is this post, so I'll get right to it. This Tuesday's Forgotten film is the 1983 scifi fantasy film Krull.

Krull is a planet ruled by an evil alien entity simply referred to as "The Beast." He and his horde of minions reside in a rock-like spacecraft that appears in different areas of the planet each day. Two warring kingdoms make an uneasy truce to defeat the Beast through the marriage of Prince Colwyn and Princess Lyssa. During the ceremony, the Beast's army attacks the parties and kidnaps Lyssa, leaving Colwyn the only survivor.

Colwyn is granted assistance by an Obi-Wan-like figure to rescue Lyssa and defeat the Beast with the aid of the Glaive, an ancient star-shaped weapon. Along their journey to the Beast's lair, they enlist the help of several characters, including an ancient seer, a cyclops, a comical magician, and a band of escaped prisoners helping Colwyn in exchange for freedom (two of whom are played by Liam Neeson and Robbie Coltrane).

I recently watched the movie on demand on my cable system. While certainly not a four-star film, I enjoyed it more than I expected to. I watched it mainly for a "so bad it's good" experience, but I didn't find it all that bad.  Cliched certainly, with its mixture of Star Wars and medieval motifs, but an enjoyable way to spend an hour and a half at home on a Saturday night.

I'm not sure if the film is in print on DVD right now, but there appear to be plenty of used ones floating around, and you should be able to find it pretty easily.

Remarkable how many not-terrible to solid-enough fantasy films emerged in the wake of the Tolkien Explosion of the latter '70s...pity a steady stream of better work never quite emerged from the boomlet, though there are a scattered few...

I loved that movie!! Thanks for reminding me I need to find that.