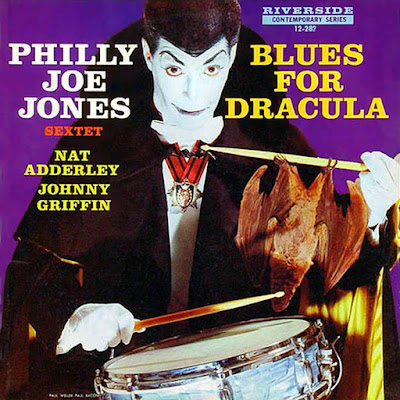 The last Thursday of each month at the blog brings us that month's Underappreciated Music to spotlight, well--underappreciated music. For the Countdown to Halloween, boy do I have a good one!

See that album cover above? Is that not the coolest thing you've ever seen? Until earlier this month, I didn't know it existed. From the first moment I saw it, I had to know everything about it.

Philly Joe Jones was a noted jazz drummer from my hometown of Philadelphia and is most remembered for his work drumming for Miles Davis and Chet Baker, among others. He also led groups of his own, this sextet being one of them. Blues for Dracula was his first release as a leader, and what a way to make a debut!

The titular first track is the only one that ties into the Dracula theme, which is a shame, as that track is joyfully weird, with Jones speaking in character as Dracula over his band's music. I would have loved to have heard an entire album of that. The remainder of the album, however, is straight-ahead jazz, which is in no way a bad thing. It's a solid jazz album, even if not doing the entire album in character seems like a missed opportunity.

Here it is in all its glory. Thanks!