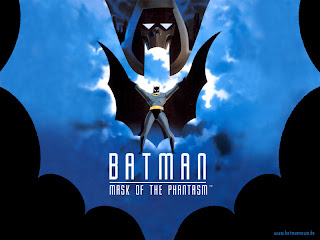 It's Tuesday, and that means another forgotten/overlooked/just plain good TV series, movie, or music. Today, since I've been in a DC Comics mood this month, I present the animated film Batman: Mask of the Phantasm.

This was released on Christmas Day 1993, and is set in the same universe as the wonderful Batman: The Animated Series. Here, Batman (voiced by the popular Kevin Conroy) investigates the new villain Phantasm, who is knocking off Gotham's mob bosses. Who is he, and what, if anything, does the Joker (the excellent Mark Hamill) have to do with it? Mix in an old flame of Bruce Wayne (played by Dana Delany) and you have an intelligent, beautifully animated film that beats most live action Bat films.

Here is Batman: Mask of the Phantasm. The last couple minutes are missing, unfortunately, but you can surmise what happens.  I also had to change YouTube accounts at one point, so there is some footage overlap. Thanks!

Better, I'd say, than all but perhaps two of the other films...the biggest problem with it is that we don't actually see Dana Delany (no second E).

I assume one of those films is Batman '66.

Thanks for the spell check. And to think I proofread for a living...

And I forgot THE WILD WORLD OF CATWOMAN.

The Artful Gypsy aka Wendy the Very Good Witch said...

Hi Phillyradiogeek....I just wanted to let you know that you are one of the winners in "The Halloween Tree" book Give-Away! Congrats on having your name pulled out of the hat. Go over to today's post to see all the details, and email with whatever address you'd like it mailed to, or let me know if you'd like to pass on your win, and I'll choose another name in your place! I think you'll really appreciate it though....at least I sincerely hope you will like it as much as I do! :o)

Congratulations, Brian. I remember liking the Bradbury book as a child.