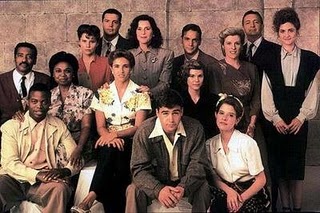 I'm a couple of hours early, but better early than never.  This week's Forgotten TV is the 1991 ABC drama Homefront.

Homefront was a series that focused on a small town's readjustment to life immediately after World War II through the prism of three different families.  Throughout the two-season course of the series, the show tackled several social issues including racism, women's rights, and other societal matters, but also had elements of soap opera.  One of the main stars of the series was recent Emmy winner Kyle Chandler (Friday Night Lights).

Too early is never a sin in this compass! I vaguely remember HOMEFRONT...it didn't sweep me up as did such contemporaneous historical drama as CHINA BEACH, but I remember it being not too shabby.

Contrast THE PLAYBOY CLUB, where, at least, thank goodness the tallest blond woman is the focus of the series! (It would be Wrong otherwise, of course. If there was a possible cliche to touch on, it was Pavlovianly rung hard.)(Also, the series seems about as unstuck in its supposed time as HAPPY DAYS used to be. Jump the timeframe, let alone any sort of fish or game.)

HOMEFRONT is a favorite of my wife, so she'll enjoy this quite a bit.

TPC will likely be the first new series axed, given the universally horrible reviews. I don't expect much from the ratings, despite the branding (although that branding is long removed from its glory days).

The Hefner-impersonator narrator isn't helping. Nor the timeslot competition...what with a retro HAWAII FIVE-0 reboot and the will-they/crime drama CASTLE with solid audiences.

I wouldn't be surprised if the likes of MAN UP doesn't disappear first, but, yeah, CBS's dead SWINGTOWN might end up the least embarrassing of the broadcast nets' imitations of MAD MEN.