Tuesday's Forgotten TV-Movie: Home for the Holidays aka Deadly Desires (1972) 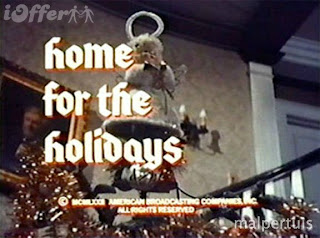 Today I bring you the first Christmas-themed Tuesday's Forgotten selection of the season. Surprisingly enough, it's a thriller.

Home for the Holidays (aka Deadly Desires) is an ABC TV-movie about four adult sisters who return home to spend Christmas with their ailing father. Much to the girls' surprise, the father asks them to kill his new wife, who he believes is poisoning him. The women write off their father's belief as the paranoid ramblings of an old man; but soon, strange events lead the daughters to think that, just perhaps, the old man isn't so crazy after all.

The film stars Sally Field, Julie Harris, and Walter Brennan, to name a few, and was written by Joseph Stefano (who adapted Robert Bloch's Psycho for the screen), produced by Paul Junger Witt, and executive-produced by Aaron Spelling.

Here, almost exactly 40 years to the date (November 28, 1972), is the telefilm in its entirety. I love that this video includes the ABC movie night intro of the time. This movie is not to be confused with a previous Tuesday's Forgotten Film, the 1995 Thanksgiving comedy of the same name.

Read a post on this one last year, I think. Still haven't seen it, maybe I will sit down and watch soon. Sounds fun!

To be honest, I haven't seen it yet either. It has an interesting pedigree, so I'm intrigued.

I've met screenwriter Joe Stefano myself; I was an extra on a film he wrote, "Two Bits." It went straight to video, and no one saw it. That's a post topic right there!

That is cool! I never knew you were an extra in a movie!

Stefano did everything he could to steal credit from Bloch for PSYCHO, despite both Hitchcock and Bloch himself thwarting those efforts. He outlived the other two, and got that idiot Van Sant to give him a vastly more prominent credit on the poor remake than he deserved.

That said, Stefano was the primary partner with Leslie Stevens on the original THE OUTER LIMITS and wrote one of the best episodes of the series, "Nightmare" (the original starred James Shigeta and Martin Sheen; the revival series remake episode isn't worth seeing). I take it he was a decent fellow to meet.

Are you easily visible in the film, Brian?

Todd: We only had a two sentence conversation. Me: Is shooting going well today? Him: yes! That was it. I have a picture of him somewhere, along with several photos of me in costume. The film is set during the Depression.

You can see the back of my head to the right of the screen for three seconds. My 15 minutes of fame!