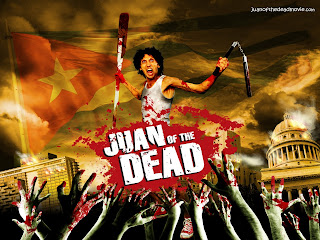 This week's Tuesday's Overlooked Film is the 2011 Spanish-language horror comedy Juan of the Dead.

Juan and Lazaro are two lifelong friends in Cuba who have meandered through their lives with no career or ambition, just the way they like it, doing whatever odd jobs they can to get by. When Cuba suddenly becomes overrun with zombies, they take advantage of the situation by hiring themselves out as zombie killers ("Juan of the Dead, we kill your loved ones, how can we help you today?"). In the midst of the violence, Juan tries to reconnect with his estranged daughter Camila while trying to squelch the budding relationship between her and Lazaro's son Vladi.

The film is a bit of a spiritual sister to the highly acclaimed Shaun of the Dead, but has enough of its own idiosyncrasies to avoid being a rip-off or carbon copy. There is some political context (the Cuban government claims the zombies are in fact "dissidents") and some uniquely clever scenes (such as Juan being forced to dance a tango with a zombie with whom he happens to be handcuffed).

The film is readily available on DVD in the usual outlets and is currently available for free viewing on Comcast video on demand.

Below is a teaser trailer for the film, which instead of using footage from the movie, is a fake commercial for Juan and Co.'s service. Enjoy!

I had missed this one altogether...shall see if it's OD from Verizon, as well...