Tuesday's Overlooked Film: Standing in the Shadows of Motown 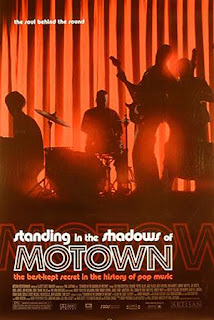 This week's Overlooked Film is the 2002 documentary Standing in the Shadows of Motown.

The film documents the history and sound of the Funk Brothers, the backing band for all of the great hits of Motown records in the 60s and early 70s. Although uncredited on the records themselves, it was the Funk Brothers that gave Motown it's distinct sound, with production and direction of Motown's founder Berry Gordy. Through interviews, reenactments, and archival footage, we learn how the band worked to make that unique Motown sound, helping acts such as The Four Tops, The Temptations, Supremes, and every act signed to the label (and it's companion labels such as Gordy, Tamla, and others). Considering the great contribution they made to the record company and pop music in general, the recognition the band gets is long overdue.

Here is the band in action, along with just a few of the many great hits they made memorable. Thanks!

I loved STANDING IN THE SHADOWS OF MOTOWN. The music is great and the story of the musicians who made it was fascinating!

Were they in the big band backing Stevie Wonder on his early live hits?

I need to catch this.

Todd: that's a good question. He seems like someone who could put his own band together easily, but in his early years, I'm not sure.