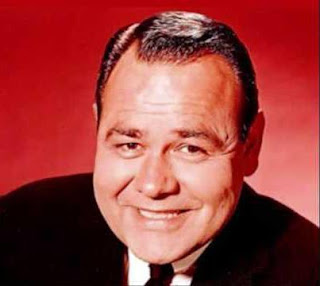 I was originally going to showcase a very different project for this week's Tuesday's Overlooked, but in the wake of today's horrific events in Boston, I'll hold it for next week. Today I think we can use something lighter, something more in the way of comfort food.

This week, I feature the work of one of my all-time favorite comedians, Jonathan Winters, who, as you know by now, died last week at the age of 87. I first saw Winters, as I'm sure many of my generation did, as Mearth, the senior citizen son of Mork and Mindy. As crazy an idea as that was, I was amazed at Winters' ability to, well, to do what he does. But that was nothing. It was after the series aired that I saw what Winters could really do, and it almost defies description. His ability to create comedy from the slightest prop or thinnest of concepts is not matched by anyone.And as manic as he seemed, he was anything but. You have to have complete control to create the comedy Winters did. He didn't just make me laugh, I howled, rolled on the floor, became spastic at just about everything I ever saw him do. It's become cliche to say this about talented people, but here it applies: there will truly never be another person like Jonathan Winters.

Here I feature some wonderful clips that show just a hint of his genius. Winters was one of my comedy heroes, and I will always hold his work close to my heart. Thanks!

His appearances on Parr were a highlight of my misspent youth. Thanks.