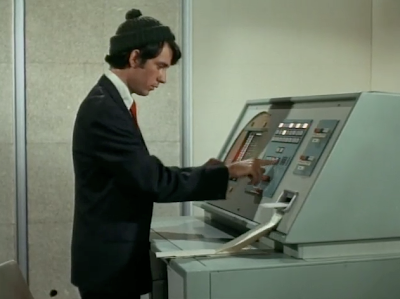 It's raining here in Philadelphia, but it's always sunny in the Internet! Enjoy the cyber-sunshine with these fun and informative links!

Michael Nesmith is currently on a small US solo tour and will be stopping here in Philly this upcoming Tuesday for a sold out show at the World Cafe Live. Here he talks to Rolling Stone about the tour and his reputation as being the "difficult" Monkee.

An alien code may be hidden in our DNA. That would explain a lot.

This is a question I've wanted an answer to for awhile now, as I don't understand the ridiculous hate pelted at  an actress I like quite a bit. What is Anne Hathaway doing wrong?

Here are a couple of cool images of a vinyl record magnified 1000 x.

Today is National Grilled Cheese Day, and April is Grilled Cheese Month. Nobody loves a good grilled cheese sandwich more than I do--and I make an awesome one, if I do say so myself--but I think this version is a bit too excessive.

Finally, DC Comics makes a bit of history this week. Batgirl #19, out in retail outlets this week, discloses that a character introduced back in issue #1 of the series, Barbara Gordon's artist roommate Alysia Yeoh, is transgender. She is the first non-superhuman character in a mainstream superhero comic to be revealed as such.