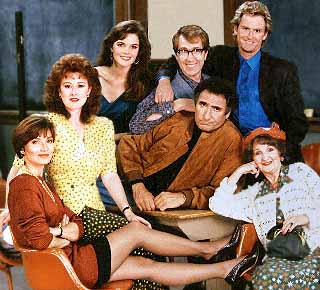 The John in question is John Lacey (Hirsch), a high school teacher who comes home one day to find his wife has left him without warning, leaving only a letter announcing her departure. Confused, lonely, and financially broke from the divorce settlement, he joins a support group, the One-2-One group, comprised of other lonely characters who have more than their share of quirks.

The humor revolves largely around the wackiness of the other stereotypical characters (the louse, the nerd, the strange old woman) and how straight man Hirsch reacts to their idiosyncrasies. There's also a "normal" female character who is obviously the one for Hirsch, yet their pain from the loss of their previous relationships stalls their progress toward each other.

The show, based on a British series of the same name, was bounced around several days and time slots throughout its four seasons and never had a chance to bond with audiences, despite initially good ratings. The show debuted in 1988 and ended in 1992.

Here is a full episode from the series. Thanks!

I had utterly forgotten that Isabella Hofmann was a regular on the series...she made a stronger impression on me (with a different hair-color) on HOMICIDE: LIFE ON THE STREET as (eventually) Capt. Megan Russert. A lot of these folks were to log some serious time on good crime drama series (given how much US tv is crime drama, perhaps that's not all that surprising).