Tuesday's Overlooked Film: Hello Down There 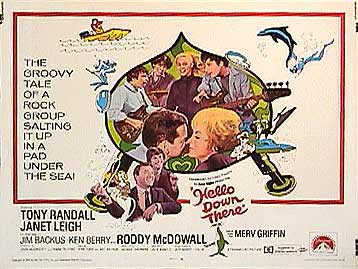 This week's Tuesday's Overlooked Film is the 1969 aquatic comedy Hello Down There.

Hello Down There stars Tony Randall as Fred Miller, an engineer who designs an underwater home for his company. To prove its feasibility, he moves his wife (Janet Leigh) and children into a prototype, named the Green Onion, to live there for thirty days. His teenage children (along with a very young Richard Dreyfuss) belong to a rock group that gets the attention of a record exec (Roddy McDowell) who is so impressed with the group that he books a television appearance for the band on The Merv Griffin Show from the Green Onion with the real Merv Griffin in tow!  Add to the story a rival engineer (Ken Berry), a fight between sharks and dolphins, a pet seal, and Jim Backus, and you get an offbeat late 60s romp of a film. 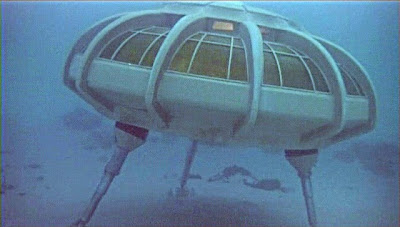 As silly as the description sounds, it's actually a fun film--at least my boyhood self thought so back in the day. The film was once released on DVD but is unfortunately out of print, but you might be able to pick this up on the secondary market.

In lieu of the actual film, enjoy this clip of Dreyfuss lip synching to a voice that sounds nothing like him (the voice of big time music producer Jeff Barry, to be exact). Enjoy!

I recall liking it (when very young) most for the dolphin and Janet Leigh. Weirdly abrupt ending/non-ending. In all, it gives a very weird effect.

Todd: it's one of those movies I expect to see on TCM overnight Fridays when they show their cult films.

Saw this as a teen whenit was on the "ABC 4:30 Movie" only because Roddy McDowall was in it. I notice once again his name is misspelled on the theater poster. It happened so often I wonder why he didn't put something in his contract to prevent it from happening. Anyway, I wasn't very enthralled with this when I saw it all those ages ago though I do recall it was fun to see people and actors I knew from TV (Backus, Griffin) in an obscure movie. I don't remember it being in the theaters -- at least not in my part of Connecticut where I grew up.

John: thanks for the memories. I also first saw it as an afternoon TV-movie.

I can see this movie striking a chord when you were younger; I would have loved it then. I bought the out-of-print DVD a few years ago and still enjoyed it, though it is quite silly at times, as you say. Some of the songs are pretty dang catchy.

Just an FYI - the movie has recently been re-issued by the Warner Archive Collection, and is available there.