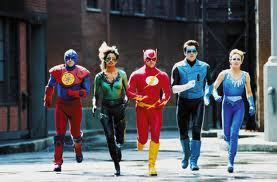 The pilot, in the form of a 90-minute film, follows a young meteorologist who develops the superpower of control of ice and cold. She is then recruited to be a member of the Justice League, which consists of Green Lantern, the Flash, Fire (a character familiar to League fans of the 80s and 90s), the Atom, and Martian Manhunter (played by the always intriguing David Ogden Stiers). Superman, Batman, and Wonder Woman are conspicuously absent. The team bands together to fight a weather powered villain played with campy malevolence by Miguel Ferrer.

It's easy to see why CBS passed on the project. The costumes and special effects look awkward, and the performances aren't exactly Peabody-winning caliber. Suffice it to say, it definitely looks like an action/adventure TV show of the late '90s that you might find in syndication (where I wonder if it might have had at least minor success). Although this never aired in the US, it did air in many other countries, and can easily be found on bootleg DVD at comic cons and Internet retail sites.

Better yet, watch the entire pilot right here.  Thanks!

Yeah...I've forgotten the name of the first-run syndie series of this vintage that was basically a JUSTICE LEAGUE/THE CHAMPIONS/CHALLENGERS OF THE UNKNOWN sort of thing, and it had a similar feel (a bit gloomier, perhaps). Meanwhile, this is at least as competent as entirely too many hero films of the last thirty years, to judge by the first five minutes or so...