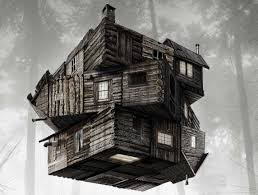 Sorry for the long time since my last posts. I've been out of town for a few days, and the lead-up time to that trip required a lot of my attention. I'm back now at the start of July, which means half of 2013 is officially over. And to think I still have the aftertaste of New Year's Day nachos lingering in my mouth. Oh well, let's make the most of the second half of the year with a new Tuesday's Overlooked Film...the 2012 comedy horror film Cabin in the Woods.

Cabin in the Woods is about five college kids spending a weekend in a remote...well, you know. They seem to resemble the usual formula of horror film victims: the jock, the brainy guy, the slacker, the good girl, etc. They also seem to make the same horror cast mistakes. Why do horror films always seem to follow the same formulas? This movie offers an explanation. 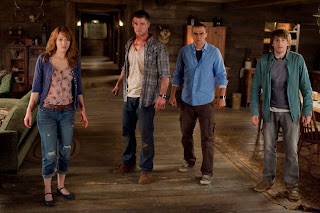 I won't spoil the main conceit of the film, even though it may be common knowledge by now, but Cabin in the Woods takes all the horror film tropes and turns them on their heads, giving them new life and a fresh way to look at them. Cabin also does a great job of mixing humor with horror, without diluting the power of either, something that's not easy to do. However, writer/producer Joss Whedon and writer/director Drew Goddard have experience successfully doing just that via Buffy the Vampire Slayer and Angel, so the film has a great pedigree.

I really shouldn't categorize the movie as Overlooked, as it did quite well both critically and commercially, but it's worth a second look, as it's a smart, well-crafted tale.

Oh, and a Cabin in the Woods amusement park ride is opening at Universal Studios Orlando this fall.