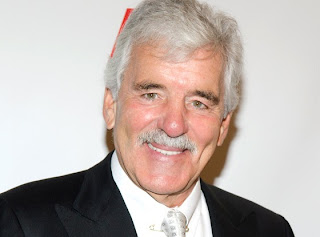 I was saddened to learn of the passing of character actor Dennis Farina on Monday at the age of 69. Farina was an actor I always enjoyed seeing in various projects. His blue collar attitude always appealed to me. Although he was from Chicago, he could have fit right in my South Philly neighborhood. He always gave the impression of a man who was tough as nails on the outside but driven by values and principle on the inside.

This image can easily be seen in the TV series that first made him famous, Crime Story. The series about a Chicago police captain and his Mafia antagonist during the early 60s was a cult hit during its two seasons on NBC during the mid-80s. The series was highly stylized and often over the top, but it developed a cult following (including my parents and older siblings).

Here is the series' memorable opening, which featured the Del Shannon oldies classic "Runaway," and the first few minutes of the series pilot.

Here also is an episode of the old IFC series Dinner for Five, in which Jon Favreau and four other film industry members shared casual conversation around a dinner table. In addition to Favreau and Farina, this episodes features Gina Gershon, Ron Livingston, and Faizon Love.

Finally, a link to a previous Tuesday's Overlooked, the 1987 action comedy Midnight Run, costarring Farina as a Mafioso trying to stop accountant Charles Grodin from testifying against him in court.

Thanks, Brian...I probably saw that DINNER FOR FIVE at the time (a decade back or so) but it doesn't stick in the memory...the others do...