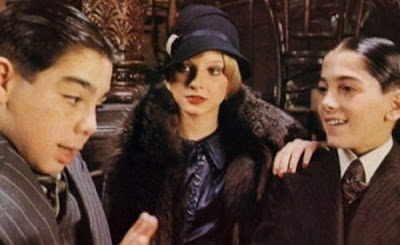 Bugsy Malone stars Scott Baio as the titular character, a boxing promoter down on his luck who keeps company with a successful speakeasy owner, "Fat Sam," during Prohibition. He helps out Sam during his feud with a rival gang and falls for one of the speakeasy's female performers, played with sass by Jodie Foster.

Oh yeah--the entire cast is comprised of children. And it's a musical.

The film was Alan Parker's directorial debut and featured songs and a musical score written by Paul Williams. The film takes an intriguing turn with the usual gangster film cliches, by including characters in song, who are played by children yet singing voices are provided by adults (a choice Parker and Williams would later admit was a mistake). To get by the gang violence, real guns were replaced with the unfortunately named (for a kids film) "splurge guns," which shoot cream pie filling instead of bullets. 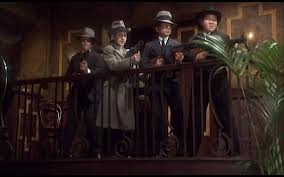 The movie was only a modest success at the box office, but got repeat airings on cable TV. I for one remember WTAF-TV Channel 29 in Philly (now a Fox affiliate) airing it every year or so, and I always considered it a treat when it appeared. Give it a chance and you will too.

In fact, you can try it right now! Here is the film in its entirety courtesy of YouTube. Enjoy!

Well, as her contemporary, I stood second to none as a fan of Jodie Foster...but this one I didn't ever quite cotton to (THE LITTLE GIRL WHO LIVED DOWN THE LANE or TAXI DRIVER, sure...they didn't pretend to be wholesome!). A lot of people have dug this one over the years (Parker and Williams are usually not my cup of tea, either...that might have something to do with it...).