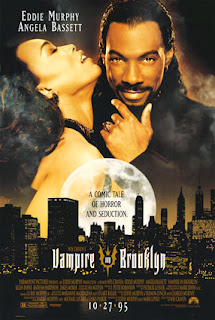 It's Tuesday, and that means Tuesday's Overlooked Film. In the midst of the Countdown to Halloween, we have this week's entry, Wes Craven's Vampire in Brooklyn.

Vampire in Brooklyn stars Eddie Murphy as Maximillian, a suave vampire from the Carribean who has come to Brooklyn searching for the daughter of a fellow vampire. He believes he has found her in police detective Rita (Angela Bassett), who, it is revealed, has vampire ancestry. Maximillian gradually pulls Rita under his influence and bites her. Rita's partner sees Maximillian for what he is and works to save Rita from Max's power.

The film was not well received by either critics or at the box office, but there are fine performances here, even if the film does contain moments of Murphy's crude humor, which may turn off some viewers. Murphy also continues his habit of disguising himself under heavy makeup to portray multiple characters, such as a preacher and petty criminal. The movie still delivers some decent laughs as well as thrilling moments. Bassett is particularly intriguing to watch.

The film is available on DVD (quite cheaply, at that) as well as various streaming services. Below is the film's trailer. Thanks!

Never watched this. The combo of Murphy and horror seemed to conflicting to me. Might give in, just to see what it is all about.

It's certainly not a straight horror film, and I don't think it's a great film, but an interesting one. I enjoyed it more than I thought I would.

Angela Bassett elevates it slightly. When even she can only do so slightly, however...and it is better than HARLEM FIGHTS...er...NIGHTS...