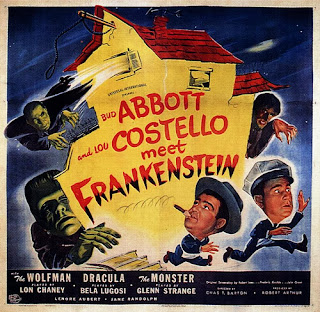 Today is the last Tuesday's Overlooked Film for this year's Countdown to Halloween, and we visit one of my absolute favorite monster movies--Abbott and Costello Meet Frankenstein!

I frickin' love this movie!

Bud and Lou are railroad baggage claim clerks who receive some scary cargo--the bodies of Dracula and Frankenstein, sent to be featured in a Miami house of horrors attraction. Drac's goal--to take control of the Frankenstein monster by replacing the monster's brain with a dim-witted person whose easy to control.  The intended victim is Lou, naturally. Larry Talbot, aka The Wolf Man, learns of Dracula's plot and goes to Miami to stop Dracula. Lon Chaney Jr once again plays the Wolf Man, the role that made him famous, with Glenn Strange playing the Frankenstein monster and the great Bela Lugosi as Dracula. Surprisingly, as famous as Lugosi is for playing the evil count, this movie is only the second and last time he played the character on screen.

The movie has very funny moments (at least if you find their style of comedy funny--and I do), but the monsters are, wisely, the straight men to the antics of Abbott and Costello, allowing the comedy and spookiness to play out equally without drowning each other out. The climax of the film is quite satisfying and exciting, and the movie turns into an all-out monsterpalooza. The whole film is just great fun--what more can you ask from a classic monster movie?

Here is the film's trailer. I highly recommend you check the movie out. It's available at the usual outlets. Thanks!

It is a great, fun movie, for sure!