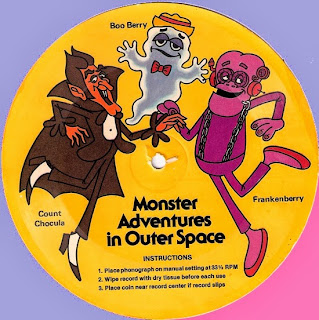 Welcome back for Day 2 of the Countdown to Halloween. Today I feature two tasty treats: recordings starring the Monster Cereal characters!

As I'm sure you know by now (as the news has taken the Halloween online community by storm since August), General Mills has not only brought back cereals Count Chocula, Frankenberry, and Boo Berry for another Halloween season, they've also resurrected two previous monster cereals that have been entombed for years--Frute Brute and Fruity Yummy Mummy. In addition, there are two different box designs for each cereal, a regular one available everywhere and retro-style boxes available exclusively at Target stores.

Unfortunately, what you won't find are these two cool records that were available on select boxes of Monster Cereals in 1979. In the first story, Chocula goes to Hollywood to become a movie star, and in the second record, the Count, Frankenberry, and Boo Berry go into space.

Tells me that the cereal companies need to get back to making some cool in-the-box surprises again. Damn these parent groups.

You never know, Joe--a child might choke on a record :)