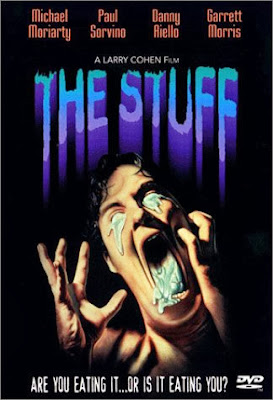 Welcome one and all to the Countdown to Halloween at Me and You and a Blog Named Boo! I'm sure many of you are checking out the blog for the first time, and I thank you. I hope you'll return again and again. I cheated a bit this year, as I started my Countdown yesterday with a few clips to get you in the Halloween mood, but today I start the Countdown in earnest.

I do so with a feature called Tuesday's Overlooked, in which I and other blogs present a look at a film or TV program that may be forgotten or unfairly ignored. This week, I discuss the 1985 satirical horror film The Stuff.

The Stuff in question is marketed to consumers as a highly popular dessert and becomes a commercial sensation. What the public doesn't realize is that the Stuff is in fact a sentient organism that controls the minds of those who eat it until it no longer has use for the person and destroys the consumer. The deadly details are realized by a young boy, who witnesses the Stuff's affect on his family, as well as an industrial espionage expert (Michael Moriarty) and a Famous Amos stand-in played by former Saturday Night Live cast member Garrett Morris. The three of them team up with a zealot-like military officer (Paul Sorvino) to combat the parasite.

Like all the films I'll feature throughout the Countdown, the film is equal parts comedy and horror, but neither aspect undermines the other. The Stuff is funny, but no less creepy. Like many other horror films, it has an undercurrent of social commentary about America's consumer culture. A film that successfully balances chills, laughs, and thought provocation is certainly both a closer look.

Unfortunately, The Stuff is currently out of print, so your best bet to find it is through the secondary market. No, I'm happily wrong! The movie is available at Amazon both on DVD and streaming.

For a taste of The Stuff (see what I did there?), check out the film's trailer.

Thanks, and enjoy the Countdown to Halloween!

The pioneering TALES OF TOMORROW had an episode which hauntingly prefigured this...have to go look to see whose story that was (I think AUDREY ROSE writer Frank De Felitta's).