Tuesday's Overlooked Film: The People Under the Stairs 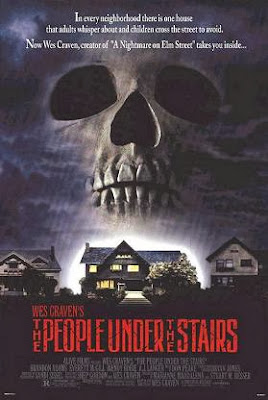 Our next to last Halloween-themed Tuesday's Overlooked Film is the 1991 Wes Craven film The People Under the Stairs.

The titular People reside at a house inhabited by the Robesons, an eccentric couple who refer to each other as "Mommy" and "Daddy." They're also slumlords who have no shame in taking advantage of their poor tenants. When a couple of them decide to steal from the house for both revenge and the care of a loved one, they discover zombie-like people, mostly young, revealing just how demented Mommy and Daddy are.

Like all the films featured during the Countdown, this is as much a comedy as a horror, most of the comedy coming through the antics of the still-creepy Robesons (played with panache by Wendy Robie and Everett McGill, who also played a married couple in Twin Peaks). There is also a strong undercurrent of social commentary regarding race and class (I've heard it said that the Robesons are spoofs of Ronald and Nancy Reagan).

The film also features Ving Rhames in an early role. This is the second film featured in the Countdown directed by Wes Craven (the first being Vampire in Brooklyn).

Here is the film's trailer. Enjoy!

The title promises something so damned scary, but while the movie has some definite creepy elements, it is a weird horror-comedic mix.

It's a different direction for Craven , that's for sure, but he obviously had something to say with this one.