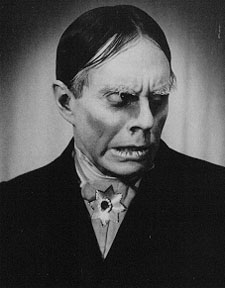 Today the Countdown to Halloween begins in earnest, and we do that with the help of a feature known as Tuesday's Forgotten.

For Countdown readers not familiar with this, Tuesday's Forgotten (also referred to as Tuesday's Overlooked) is a weekly feature shared across several blogs noting a movie or television program that has been ignored, missed, or indeed, forgotten, that the participating bloggers feel deserves a second look. The meme is curated by my friend Todd Mason, and you can see more Tuesday's Forgotten at his blog Sweet Freedom.

My choice this week is almost certainly familiar to Countdown readers. The distinguished gentleman you see above is Zacherley, aka John Zacherle (the Y was added to his name for more accurate pronunciation), one of the most famous TV horror hosts to grace the boob tube. He first appeared at WCAU-TV Channel 10 in my hometown of Philadelphia, under the name Roland, then left for New York City, where he would appear on several stations for many years as well as host his own radio show on several progressive FM stations.

Although I've seen Zacherley on various interview shows and other late career appearances, I'd never seen him in action from his TV horror hosting days--until now. Earlier this year, someone posted well over 90 minutes of Zacherley doing his thing in both Philly and New York, uploaded from an out-of-print VHS tape. Here he is in all of his glory.

Enjoy--and "good night out there, whatever you are!"

Oh, not Forgotten. Because who could forget Zacherle? And the remit includes radio, podcasting, live drama, conventions, museums, and any number of other a/v materials...including stereo/3D still imagery in several cases. Hence (and always since I started) Tuesday's Overlooked Films and/or Other A/V.

The literary anthologies attributed to him aren't too shabby, either.

And, none of the posted stuff was ever nationally syndicated? He was, I believe, the first to go national.

Not sure about syndication, but he is certainly known outside of the two markets I mentioned, so it's entirely possible.

I had never seen him actually hosting movies from his early days, except on a WHYY local special. Glad to finally find this!

Oh, yes, he was syndicated (or so my sieve-like memory tells me, I should look it up)...hence the books (though publishers were often content with books that might only appeal to NYC and 'burbs). I was just asking if the stuff on the link was from the national plays. I think he was the only one who was syndicated till Elvira...

I believe the YouTube clips are only from the local broadcasts (I think Zac says as much in the beginning, if I'm not mistaken). If any of his stuff, local or syndie, were issued on Blu-Ray/DVD, there's be quite a market for it, myself included.

Just found this a minute ago:

Yup, SHOCK THEATER was a national offer, helping to inspire a lot of the local folks, from Ernie Anderson on over (though Maila Nurmi probably started in LA at about the same time).

Thanks Todd. If only they were still around. The only one I'm aware of is Svengoolie on Chicago TV (and nationally on MeTV).